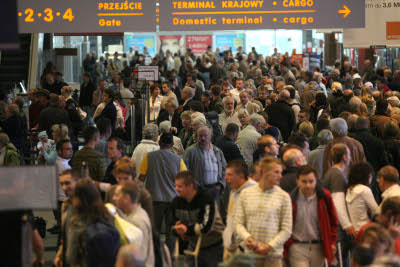 Polish citizens working abroad are sending billions of pounds in earnings back home every year. According to the Polish Central Bank, Poles throughout Europe sent 3 bln pounds to Poland in 2007. An estimated 1.8 bln pounds came from the UK.

This record-breaking amount not only exceeds the 2006 figure by 10 percent, but is expected to grow even further in 2008.
Moreover, these figures are likely to be understated, as they only take into account money orders and electronic transfers, omitting those workers, who avoid official methods by traveling with cash and those who work illegally.

Nonetheless, the phenomenon has turned money movement into a big business.

Transferring money to Poland is the most popular financial service used by Polish emigrants. Banks such as PKO BP and National Westminster even have special offers dedicated to Poles leaving for Britain, which allow transfers to be performed without charge.
Other companies providing methods of transmitting money include Western Union, who has recognized the demand and employs Polish-speaking staff, and Money Bookers, which offers safe transfer and collection of money via e-mail, making the process immediate and inexpensive.

According to Ania, who left Poland while it was under communism and now works in London as a member of the managerial team of an international hypermarket chain, these services were not available a few years ago, but now they are even accessible at corner stores. She also states that she has come across many Polish students who are living in London, balancing several jobs just to pay off their education.

Having experienced the many social changes resulting from the influx of Poles to England, Ania recalls that travel used to be expensive, people had to plan ahead of time and apply for a visa, but now they have the opportunity to

As a result, many Poles go abroad on a short term basis, rent cheap accommodation, and are not choosy about the kind of job they accept. Typically, they work to either send their earnings to family in Poland or to save and later invest in property or start their own business. More importantly, having spent some time away, their attitude towards life and work has changed, returning to Poland with a fresh perspective.
Poles working in the UK and Ireland, for instance, are earning enough to support themselves and their families in Poland.
While some turn to emigration as the only way to get by, even if it means leaving their family to live in an overcrowded apartment with strangers, others choose the move to gain additional experience, or assimilate English language through cultural immersion, while, in the meantime, enhancing their living standards.
Analysts state that the flow of money into Poland has caused internal consumption to escalate, especially within residential and automotive markets.

One related case involves a man who moved to England on impulse to work as a bus driver for three years while his wife continued to pursue her career in Poland and take care of their children. He returned to Warsaw in December 2007 and, though there was no particular need for extra funds, the money that had been saved allowed his family to invest in land and purchase two motorcycles.

Wishing to remain anonymous, he said his stay in England provided him with a great deal of experience, and that his standard of life has improved, though he is very pleased to have returned to his family and started a new job.
Quite on the opposite end of the scale, Iwona, who moved to London before Poland’s entrance into the EU, left home because she was unemployed.

Like many in a similar situation, Iwona began to work illegally in hotels and restaurants. She progressively learned English and worked her way up to a managerial position in a major retail store. While she rarely sends money or gifts back to her parents in Poland, Iwona has her daughter living with her and plans to stay in England, maintaining contact with her family through frequent visits.

However, having many Polish friends who temporarily work in London and plan to take their earnings back to Poland, Iwona says there are some who, unlike her, are less ambitious. She states that some women join their working husbands simply to take care of the children and home.
Evidently, every case is different. Official data states that some 400,000 Poles have emigrated to Great Britain, while unofficial reports mention even one mln. In addition, several hundred thousand Polish citizens plan to assume jobs there shortly.

On the other hand, the Center for International Relations based in Warsaw recently revealed that only 23 percent of Poles in Britain intend to stay, while 51 percent plan to move back. Trends such as the weakening of the pound sterling may cause thousands of Poles to return home.