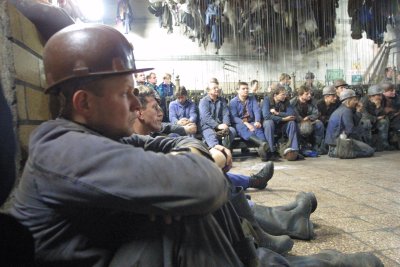 Public employees ranging from doctors, nurses and teachers to coal miners are either threatening or actively engaging in labor disruptions on a scale that Poland has not seen since the Solidarity movement 20 years ago. They are demanding higher salaries and pensions – and in the case of doctors and nurses, medical-service reform.

Miners at the Budrynk coal mine in the Silesian town of Katowice are in their 40th day of an underground protest and hunger strike.

They want their salaries raised to the same level as miners in the Krupinski mine near Zory. Both operations are government-owned.

In a dramatic move, wives of the protesters traveled to Warsaw to try to talk with Deputy Prime Minister Waldemar Pawlak. He declined to see them.

Last Friday teachers from around Poland demonstrated in Warsaw. They want their salaries increased a whopping 50 percent. To press their demand, they are threatening to strike during May, the month that the national comprehensive examination is given to high school seniors.
A threatened doctors and nurses strike is the labor disruption that worries politicians and the public the most. On Monday, Prime Minister Donald Tusk met with doctors and other medical specialists in a so-called White Summit. But no decisions were reached.
Because Poland has a free press now, the protesters are making their cases with the public in ways that would have been impossible during Communist times. They are on radio and television. And they are in many newspaper stories.

It prohibits strikes by police, employees of prosecutors’ offices and courts, custom workers and other government workers.
It also prohibits strikes that could endanger people’s lives or health – which would apply to doctors and nurses.
The pay-raise demands of doctors and nurses threaten to make the government’s health-care budget crisis worse.
The Ministry of Heath says public hospitals and clinics are 10.1 bln zloty in debt. The National Health Fund gave some hospitals more money at the end of 2007, but it is expected to be used up quickly.

Central Statistical Office figures show that tax revenue pays for only 69 percent of medical care. Patients have to dig into their pockets for the other 31 percent – or 24 bln zloty.
Because of the enormous cost of medical care, the government is entertaining ideas for privatizing more health-care tasks.
Doctors and nurses at private facilities would be able to take part in labor negotiations with their employers rather than blocking streets in Warsaw, as public-sector health-care employees have had to do.
Two of the health-care privatization ideas the government is considering are supplementary health-care insurance and dividing the National Health Fund into smaller units that could compete with each other.

The doctors’ and nurses’ protests have made politicians and the public aware of the shortage of health-care employees in Poland. Many have opted for higher-paid work abroad.
Poland could import doctors and nurses from countries that pay less – such as Ukraine.

But that approach carries with it many problems, including a long time frame for a foreign doctor being certified to practice in Poland.

To start with, many Ukrainian doctors make almost as much as Polish doctors – so many would not want to come.
In addition, it would take 18 months for the average Ukrainian physician to obtain the documents he would need to practice in Poland. Part of that involves proof of his Ukrainian medical degree.