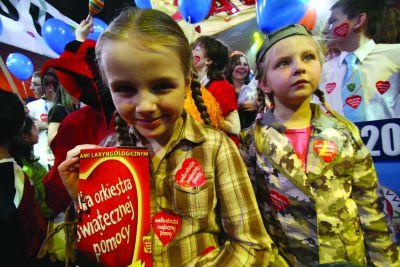 Jurek Owsiak, journalist and founder and chairman of the Great Christmas Orchestra Assistance Foundation, launched the organization in Krakow to save children’s lives.
The highlight of the final day of the event, which this year was on Jan. 13, is concerts.

Another part of the fund-raising effort is street solicitations, with the help of up to 120,000 volunteers.
The foundation also raises money through Internet auctions and donations transferred via SMS messages on cellphones.
The funds have enabled the foundation to buy more than 17,000 pieces of medical equipment over the years – an average of three pieces a day.
While foundation officials are happy about the SMS-message donations, it irritates them that the government applies the same value-added tax to these charitable SMS messages as it does with all others.

The tax is 1.1 zloty of every 5 zloty in SMS donations, or more than 20 percent of the value of each donation. The foundation estimated that this season it lost 1 mln zloty to the tax, or enough to buy 83 insulin pumps for diabetic children.
“Why is my mercy taxed?” asked a flabbergasted Andrzej Sadowski of the Adam Smith Center, a foundation that spreads the idea of free market rules and ethics.

The Ministry of Finance said it must tax SMS donations because SMS messages are a telecommunication service.
Some private experts disagree. “Sending a charity SMS is not a telecommunication but a financial service,” said Pawel Falkowski, an employee at the KPMG financial consulting company. “An operator of a cellular telephone company in such a case plays a role similar to a bank.”

Many Krakow artists contributed things of value to the Internet auction that the foundation held this year.
Andrzej Wajda auctioned a water-color painting. Grzegorz Turnau put up for bid an album of Genesis band photos.
Pudelski, or “Pudel” Franz Dreadhunter, auctioned an autographed classical guitar.
The Groteska Theater auctioned an entire performance of its play “The Tale of the Little Shoemaker” – 188 seats.
The advertising agency Supremum Group auctioned the use of three apartments for a year.
“We hope that the auction gains popularity and apartment houses will find generous renters,” says Zbigniew Woznowski, chairman of Supremum Group.

Bartosz Ignacy Wrona, a Krakow student and journalist, auctioned his services as a story teller.
“If you win the auction, I will be yours for two hours,” he said. “I can read tales, lyrics, lectures, romances, letters, papers and even a bill or telephone book.”

Two of the most interesting auctions were those of a T-shirt of Robert Kubica, the Formula 1 driver, and the rail car in which Pope John Paul II traveled in 1997.

Joanna Senyszyn, a member of parliament from the Left and Democrats Party, auctioned a whip she got from those who took part in an Equality Parade in Warsaw in 2006. It is supposed to be used to “whip intolerance.”

The final day of the fund-raising event started at 15:00 at Rynek Glowny (Main Market Square).
Those giving concerts included Pudelski, Skangur and the Kobiety Group.

During the breaks between concerts a number of items were auctioned. And at 20:00 there was a fireworks display.
Cinema City Zakopianka joined in the action as well, organizing workshops and plays for children.
In front of the cinema was a Tomcat off-road rally car that people could ride in for a fee that would go to the charity effort. Behind the wheel of the car was rally driver Mariusz Gwiazdowski.

Owsiak was delighted with the way the day went.
“This day is a holiday of all good people, the triumph of love and friendship,” he said. “If you witness such wonderful moments, seeing smiling people who meet to help others, it is hard to say that the world is evil.”