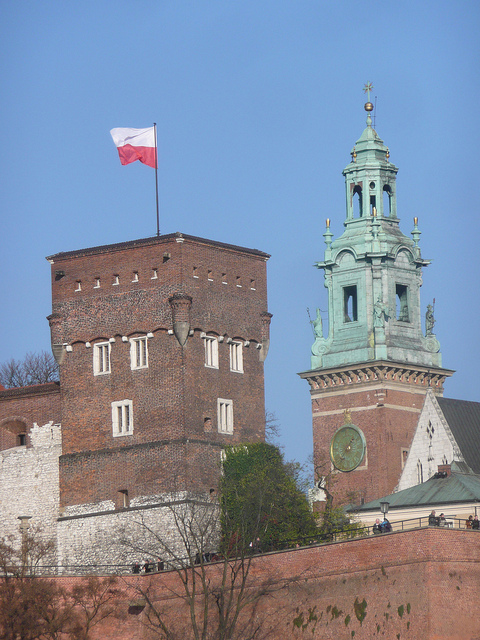 For the first three days of May, Krakow was awash with red and white as proud Poles flew flags to mark May Day, Flag Day, and Constitution Day. But, while they will now be carefully folded and stored, the flag that was hoist above Wawel Castle is to remain a permanent fixture.

While there are no restrictions on who may fly the flag and when, it is by tradition reserved for national holidays, except for on the buildings of the highest offices of state, such as the upper and lower houses of parliament and the offices of the President and Prime Minister.

Wawel Castle was a princely residence from the 11th century, and remained the seat of the Polish monarchy until it moved to Warsaw in 1610. Nowadays, it is a national monument and museum. Yet although it no longer fulfills a state function, the Wawel directors decided that the flag would be flown permanently after a petition was raised by historian Tomasz Darda.

Mr Darda’s petition was signed by more than 2,000 people, who agreed with the statement that: “For centuries Wawel Castle was the seat of monarchs, a symbol of state power and the Church. At the time of the loss of statehood of the Republic during the partition, it was a place of pilgrimage and a symbol of hope for the rebirth of the Polish state. Today, Wawel functions as a museum, educational, tourist, symbolic, spiritual, and occasionally state facility. It is the flagship of the city and the country. We believe that, even though Wawel is not officially the residence of the incumbent President… white and red flags should, due to its history, hang on [Wawel] hill.”

The Polish language website Kresy.pl reports that Wawel bosses consulted both the Małopolska council and the Presidential office on whether they should allow the flag to be flown permanently at Wawel. However, when neither was able to give a conclusive opinion, the decision was taken that it was appropriate to hoist the white and red of Poland and leave it there.