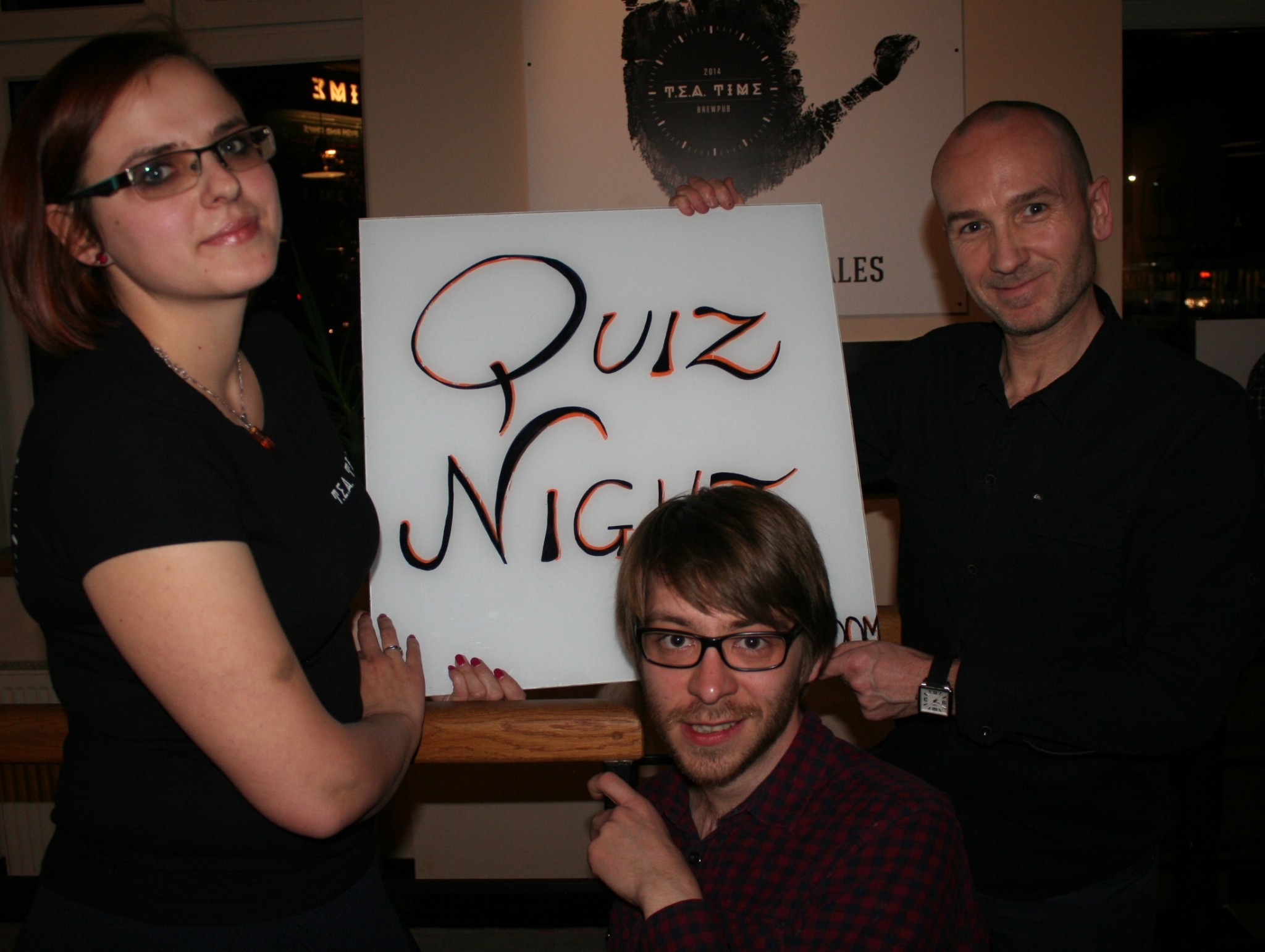 It’s caused many an argument and near-fisticuffs in pubs all over the United Kingdom.

The pub quiz tradition dates back to the late 1970s in British culture, and with an approximate 22,500 quizzes taking place all over the country each week, it shows no sign of slowing down. And now, thanks to pub owners Jacek and Sylwia Śpiewak and James Eastwood, the pub quiz phenomenon has been brought to Krakow.

James, Jacek, and Sylwia are the owners of T.E.A. Time Brewpub, a place which has already made a name for itself—despite its awkward location, Dietla 1—for being the first real ale pub in Krakow, if not in Poland. Yes, there may be British and Irish pubs aplenty in Krakow, but generally they stock bad bottled beer at extortionate prices. T.E.A Time was the first place not only to brew its own ale on site, but to actually sell British real ale. Meeting James as the pub was gearing up for its first birthday celebration, I asked him: “Why bring real ale to Poland in the first place?”

“Five years ago, myself and my wife were planning on moving to Krakow. As my wife is Cracovian, we’d visited many times, and, as I was considering what to do for work when I came here, it was always in the back of my mind that real ale could work in Poland. At the time there were a couple of pubs which had opened which had started to sell different types of beer than the usual lagers, for example House of Beer and Omerta. It was in Omerta that I met Jacek and Sylwia, who were managing the place. Jacek was a passionate home-brewer but had never tried English real ale. Then one time we went to the UK and they tried it and loved it. It was their dream to own their own place, I had experience in the brewing industry, and so the plan to start a real ale pub in Krakow was formed.” 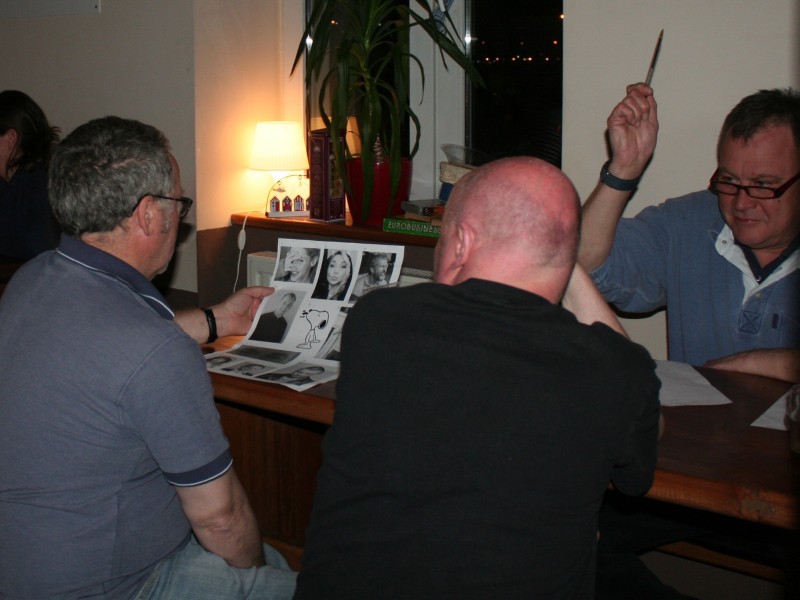 James is from a brewing family: his father, John, began in the business in 1992 and soon became an award-winning brewer, snagging numerous awards including bronze at the Great British Beer Festival in 2001. John Eastwood retired in 2005, but his legacy lives on. His recipes have been resurrected and are now on sale at T.E.A. Time.

So obviously James is an expert brewer, but what about an experienced pub quiz host? Had he held pub quizzes in the other pubs he had run?

“I wouldn’t say I’d had a lot of experience as a pub quiz host, but I’d stood in for friends from time to time, and I’d always done quizzes for friends. For example if we went to watch a football match, I’d take along a set of football questions.”

So how did he come up with the format for the pub quiz here? Some of you may be reading this and be wondering, “But what is a pub quiz?“ I asked James to explain.

“I’ve basically taken what I think are the best bits of quizzes I’ve been to. So we start off with a picture round and puzzles round, followed by a set of ten general knowledge questions. There is then a music round, where we play the first thirty seconds of a song, and the teams have to guess the artist and the song, and then we round everything off with another set of general knowledge questions. Occasionally there is a theme to the quiz—for example, we had an Irish-themed St Patrick’s Day quiz—but generally we stick to the same format.”

Of course there is the attraction of the quiz for British and Irish immigrants who want to experience a little bit of home, but what’s the attraction for other nationalities? I’m a regular at the quiz, and it’s fair to say there is a mixed crowd competing every week. At the last quiz I asked a few of the regulars what was so appealing.

“I’d enjoyed pub quizzes back home so decided to come and join,” said Andro from Tbilisi, Georgia, a member of Alcohol United, one of the regular teams. So what’s the main difference of a British pub quiz and a Georgian pub quiz? “The main difference is that the winner would be responsible for the next quiz, and they only take place once every five weeks. Here I can come along every week.” And what’s so great about it? “I like the atmosphere here. It’s given me the chance to meet random people who have since become friends and, of course, great beer.” 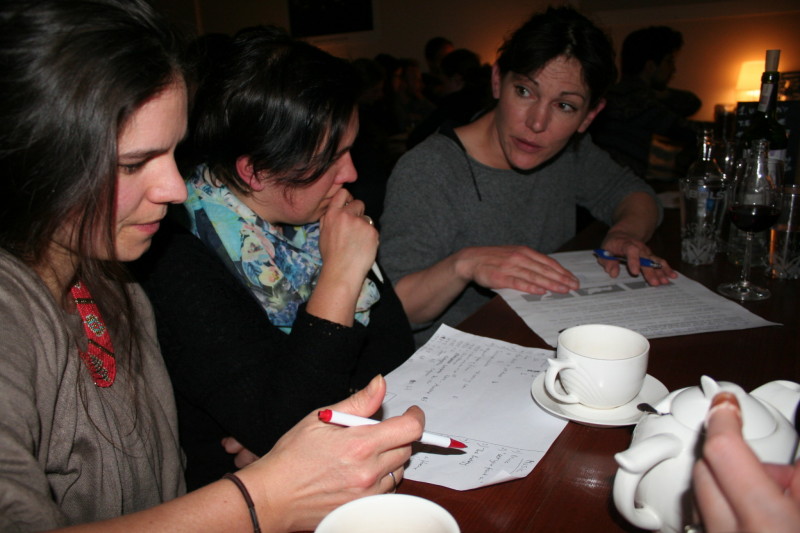 I also spoke to Damien from Krakow and Monika from Obidza, who were first-timers at the quiz. Regulars at the pub, they decided to take their chances. Well, Monika did anyway: “I’m here because Monika made me,” admitted Damien.

“I’ve always liked quizzes,” said Monika. “I like testing my knowledge, especially with people in a team. It also gives me chance to practice my English.”

Everyone I spoke to commented on the atmosphere of the place. Dan, from the Wirral, said, “I’m already a member of the pub football team, and a regular to the pub. The people and the atmosphere are very friendly, it’s a great place to be. I also like quizzes, so decided to start coming along.”

It’s good to know that T.E.A. Time is not a British pub for British people. “We’re not a theme pub. We’re just a proper pub that sells real ale,” explains James. “That’s the most important thing. We’ll never be a completely British pub: we have Polish staff, Polish clientele. With the pub quiz, we’re just trying to forge a connection between English and Polish culture.”

So, if you’re looking for a fun evening with a competitive edge— and the chance to win free beer (yep, that’s the first prize)—where you can meet new people, drink great beer and enjoy the warm atmosphere of a typical pub, then T.E.A. Time is your place. Any other reasons why you should go? Well, regular and Bar Team member Emmet, from Tipperary, gave me one other: “I just live nearby. And I like it, of course.” 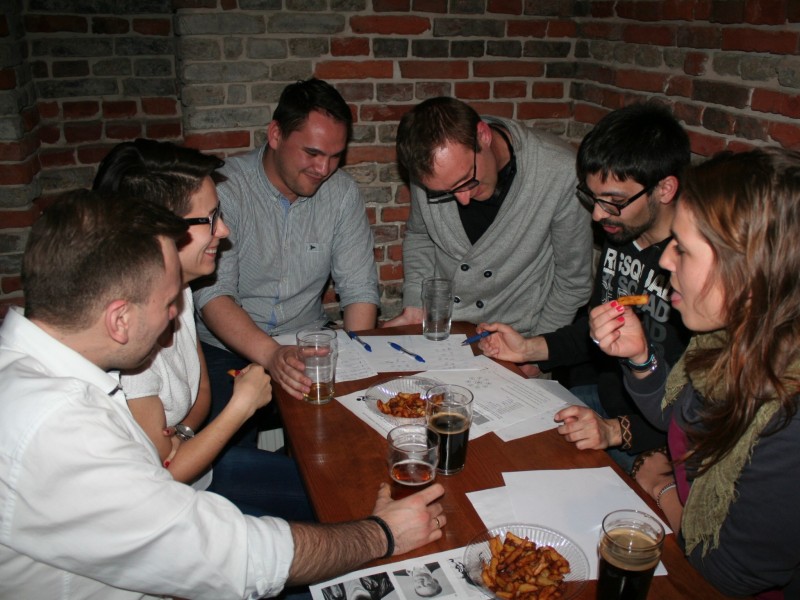 The quiz takes place at T.E.A Time Brewpub, Dietla 1 every Monday at 8pm. New teams are welcome. If you don’t have your own team, go along anyway and they will find you one. 5 zł per person and free chips for every team during the quiz. Reservations recommended.

2 thoughts on “An English Pub Quiz in Krakow”