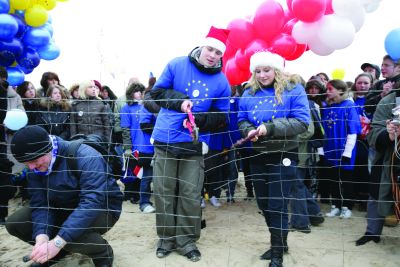 From March 2008 Poles will be able to take flights to most European countries without a check.

The reason is that Poland and eight other countries joined the Schengen agreement December 21. The agreement provides for the unfettered movement of people and cargo across the borders of all member countries. Those countries include most EU members and some non-members.

Poles are now able to cross into Germany, the Czech Republic, Slovakia and Lithuania without a passport check. Although a blessing for Poland, Polish membership in the Schengen Zone will make it harder for citizens of Poland’s eastern neighbors to enter Poland. That’s because the Schengen Zone immigration requirements are more stringent than the requirements that Poland used to have in place.

Prime Minister Donald Tusk, German Prime Minister, Angela Merkel and Czech Prime Minister, Mirek Topolanek celebrated December 21 in Porajow, where the borders of their countries meet. With them was Jose Manuel Barroso, the President of the European Commission.

Both Polish leaders said Poland’s ascension to the Schengen Zone is another step toward full integration with the EU. Tusk underlined the fact that abolition of the border controls will make travel easier. Kaczynski stressed the major contribution that the Law and Justice Party-led government, which preceded Tusk’s, made to ward getting Poland into the Schengen Zone.

The zone was created in 1985 with the agreement signed in Schengen, Luxembourg. Its goal is to make Europe a land with no impediments to the movement of people and cargo. While citizens of member countries are free to cross borders within the zone, the agreement makes it more difficult for those outside the zone to enter. Countries that join the zone must agree to a standard set of regulations dealing with visas, immigration and related issues.

Border guards and police in zone countries can use the Schengen Information System to help ensure that those who are not supposed to be in the zone are kept out. The system’s database includes information on travelers and on means of transport, such as cars.

The zone grew to 24 countries on December 21. Besides Poland, the new members are Estonia, Latvia, Lithuania, the Czech Republic, Hungary, Malta, Slovakia and Slovenia. The zone now encompasses all EU members except Great Britain, Ireland, Bulgaria, Romania and Cyprus. Non-EU Norway and Iceland also are members.

Most Poles are enthused about joining the zone. Fifty-seven percent believe membership will be beneficial, according to a poll conducted by the OBOP public opinion institute. Only 2 percent think membership will have negative consequences. Most of the nay-sayers fear that easier border crossings will lead to more drugs coming into Poland. The rest of those surveyed – 41 percent – had no opinion on whether joining the zone would be a plus or minus.

Although Polish membership in the zone means that Poles will not generally be subjected to border checks, in some cases checks can be made. So travelers should bring their passports with them, just in case. They also should be aware that even though they can travel around the Schengen Zone with no impediments, individual countries’ immigration rules – such as requirements to register in case of a longer stay – remain in force. Also remaining in force will be individual countries’ limits on importing excise-taxed goods like alcohol and cigarettes.

The lifting of passport checks on December 21 applied only to ground and sea border crossings. Airport checks will be lifted from March 29. The delay at airports involved the necessity of rearranging terminals to divide passangers into two groups – those traveling among Schengen Zone countries and those entering from or traveling to non-Schengen destinations. Polish airports have already spent 150 mln zloty on the changes.

Transport company owners and employees are among the most enthusiastic backers of Polish membership in the Schengen Zone. Until December 21, truck drivers had to wait in long queues at border crossings with Germany or the Czech Republic to have their passports checked. Now they can get across those borders quickly. Polish membership in the zone is likely to mean even longer waits for those trying to enter Poland from the east, however. That’s because Schengen Zone immigration requirements are stricter than the Polish requirements they replaced. Thus, citizens of Ukraine, Belarus and Russia will find it more difficult to get a visa to Poland. Because being in the Schengen Zone means border-free crossings among 24 countries, a visa to Poland equates to a visa to all of those countres. That’s why the requirements are tougher.

Lines at Polish consulates in Lviv or Moscow are likely to become longer because of such Schengen Zone immigration requirements as checking a visa applicant against the Schengen Information System database. Those processing visas will also demand a declaration of purpose for the visit and verification that the visa applicant has at least 500 zloty for his stay in Poland.

The more stringent requirements are likely to lead to a drop in the 1.2 mln visas that Poland issued last year to citizens of Ukraine, Belarus and Russia. That may pose a particular problem for Ukrainians. Hundreds of thousands are working in Poland. Estimates range from a low of 100,000 to as many as 500,000. Another hardship for citizens of Ukraine, Belarus and Russia is that visa processing fees will be much higher. Before December 21, Ukrainians paid nothing for a visa to Poland. Now they have to pay 35 euro.

The mountain resort of Zakopane in southern Poland is already feeling the impact of the new regulations. Last year 50,000 tourists from Ukraine and Russia spent winter holidays there. This winter half of the citizens from those countries who had booked rooms in Zakopane cancelled after the new visa rules were introduced.

Poland’s next step toward full EU integration is adopting the euro as its currency. Tusk and Polish economic experts say that should happen in 2012, just after Poland serves as president of the EU in the second half of 2011.

One thought on “Poland joins Schengen as border-free Europe expands”