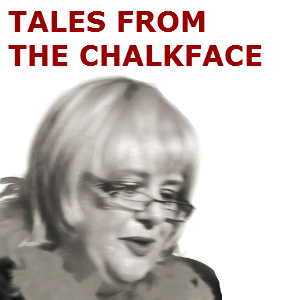 The run up to Christmas is like wading through a morass of ‘to do’ lists: the usual marking, preparing for exams, rehearsing the concert, taking down and putting up displays, writing reports, meetings – and all this as the pace of lessons must pick up if any students are ever to pass an exam.

“Dear Santa, I’m writing to let you know I have been naughty and it was completely worth it, you fat judgemental bastard! The older I get, the less inclined I am to conform to other people’s rules and regulations, which puts me firmly back in the rebellious teenager camp, only I’m hoping this time round I can do it with more style and less door slamming.”

Censorship seems to be the issue of the moment in my world. Great debate has been had in staff meetings about what students should or should not perform in the plays they produce for themselves. I can see it’s a dilemma, but since part of our exam brief in its widest sense is to encourage risk taking, as well as engendering a sense of curiosity about the world, we adults can’t then stop them when we don’t happen to like their vision. At least we’re listening, sort of.

A colleague of mine has been busy posting English Literature teaching material on Ted Ed (a really cool site!). He’s just prepared some materials for the novel To Kill a Mocking Bird by Harper Lee. This is the standard, fairly unadventurous fare that exam boards in England and probably the States too place on their exam syllabi. Imagine his surprise when he found he couldn’t post this ‘controversial’ material because the censor objected to the word ‘Kill.’ He did eventually get to post it, but now the title of the material reads: ‘To **** a Mocking Bird.’ I can’t make up my mind whether this is funny or sad, but I’m pretty sure that students all over the web will be filling in those four asterisks for themselves and some of those made up titles might be a little more vulgar than the censor intends, even without the violence.

Meanwhile, it’s all hands to the pumps for fund raising again (is this ‘again’ compassion fatigue, or just outright fatigue?). I’ve volunteered my class to put together a jar of sweets for a ‘guess the number of sweets in the jar’ contest. Everybody likes sweets, right? Oh no – there’s the healthy eating brigade to placate… I don’t think the sugar free mints will be quite so attractive. Dammit – I’ll just have to brazen it out with the thin judgemental bastards as well.