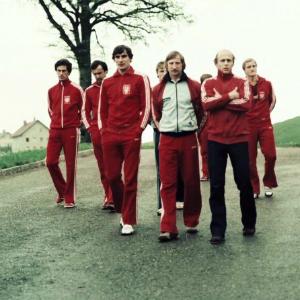 When Poland’s national team qualified for the 1982 World Cup, it was a welcome, if unexpected, distraction from the grim political situation at home. Poles were transfixed by the exploits of their team as tens of thousands of opponents to General Jaruzelski’s regime languished in prison.

Michał Bielawski’s debut documentary is a compelling examination of the weird interplay between sporting pride and dissidence before and during this memorable tournament.

The Okęcie Airport incident of November 1980 is the perfect start to Bielawski’s saga. Even if it was much ado about nothing, goalkeeper Józef Młynarczyk’s hangover became a national affair thanks to the insubordination shown by his team mates.The fortunes of the Polish squad are shown in parallel with the misfortunes of Solidarność, whose banners miraculously appeared in Camp Nou during Poland’s match against the Soviet Union.

The most impressive aspect of Mundial Gra o wszystko is the filmmaker’s self-confidence in handling archive material from Polish Television and FIFA, which are complemented with recent interviews and animations by cartoonist Janusz Ordon. Bielawski beautifully illustrates how España 82 became the opiate of the Polish masses under the thumb of martial law.