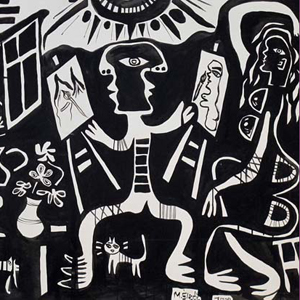 It’s a popular opinion that contemporary art is produced by the mad and sold by con men. What else is the man on the street to make of piles of bricks being sold for millions of dollars?

It is, therefore, bold – if not a little cheeky – for MOCAK to put on an exhibition of art produced entirely by the inmates of Krakow’s most famous psychiatric hospital.

Quarantined in the therapeutic hush of the museum library, the Inner Space exhibition is the result of a two-year collaboration between MOCAK and the staff and patients of the Józef Babiński Specialist Hospital.

At first glance, nothing on the wall looks any madder than what you might expect to see in the main building across the courtyard. That, of course, is part of the point. 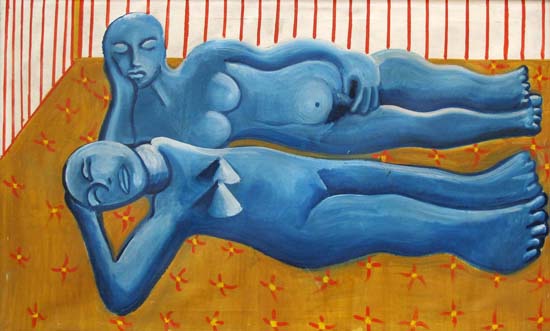 A guided tour conducted by the exhibition’s curators, Magdalena Mazik and Elżbieta Sala, starts in the Mieczysław Porębski Library – a room off the main library lined with 20th-century works of art collected and donated by the noted art historian himself.

Magdalena points out that many of the themes and styles you see in here, produced by some of Poland’s most celebrated artists, are echoed in the works by the unrecognised and socially shunned patients next door. All that separates them is a door, and our knowledge that the people who made those in one room were considered insane.

In fact, Magdalena confides, one (unnamed) publication put out an article about the exhibition titled ‘Insane Art’ unwittingly illustrated with pictures from the sane room rather than the insane room. 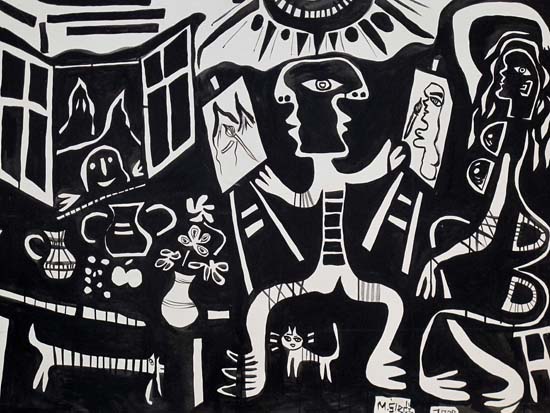 The works included in Inner Space are a tiny fraction of those resulting from what were then groundbreaking experiments in art therapy at the hospital. Today, art as a therapeutic tool is fairly common but, as Elżbieta remarked, where there is art therapy, there is not always art.

It raises the uncomfortable question: are we looking at ‘genuine’ art, or are these works the equivalent of discarded, bloody bandages – the materials used to heal minds rather than bodies.

The curators have two, slightly elliptical, answers to this concern. Firstly, they were drawn to paintings that had clear signatures – in the manner of an artist who wants her or his work to be presented publicly, and associated with their name.

Secondly, several of the featured artists/patients willingly collaborated with the project and, as Elżbieta says, some of them might not have ended up in a psychiatric ward if their work had been appreciated and exhibited earlier. 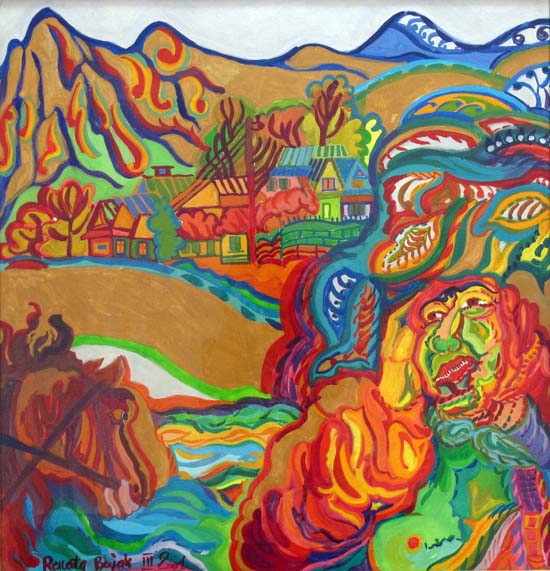 Renata Bujak, Spring in the Valley

There is a dilemma at the heart of Inner Space that the curators acknowledge. Had these works been presented simply as paintings by ‘little known’ 20th century artists, few would have found much to recommend them. Hearing the stories of their colourful creators, however, suddenly makes them fascinating. In other words, is it the madness that’s truly interesting here, or the paint on the canvas?

How can you resist the tale of the woman who made herself homeless by donating all her possessions to the church, then spent decades compulsively painting on any scrap of paper she could find. Or the patient who unfailingly attended open air painting sessions with a large sign around his neck reading “Multidisciplinary Artist.”

The ‘annex’ to the exhibition, which actually contains the bulk of the works, is in small room just around the courtyard. Several of the works on one side of this gallery have been slashed or stabbed, though we don’t know why – that will remain in my mind far longer than their content.

The painting that inspired the name of the exhibition is also in here. It’s a small work depicting an oddly infantilised figure lounging on a blue couch, with a motorcycle leaning against the wall in the background. 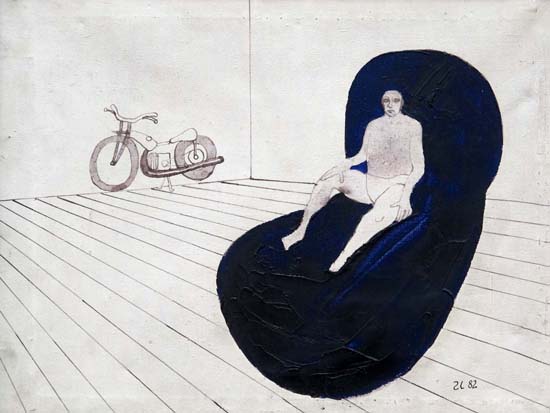 The MOCAK label is the result of a direct conversation with the artist, who explained it was a self-portrait of a moment dreaming about becoming world speedway champion. Is the hospital label evidence of institutional apathy, or did the artist simply change his mind?

It’s one of many questions this exhibition can only raise.

One thought on “Art of the Mad – At MOCAK”