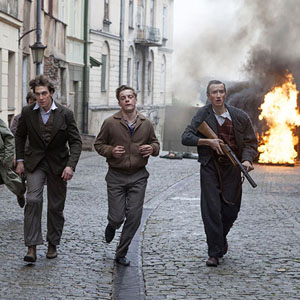 There has been more room for manoeuvre in Robert Gliński’s filmmaking career since he completed his term as Rector of the Łódź Film School in 2012. Despite his incumbency, the Polish director has displayed a genuine nonchalance behind the camera since his uncompromising debut, Cześć Tereska (2001).

Gliński has gathered the courage to tailor a new cinematic version of Kamienie na szaniec, one of the best known and loved examples of Polish World War II resistance literature. Aleksander Kamiński’s book describes the lives of members of the Szare Szeregi (Grey Ranks) – a Polish underground Scout movement active under German occupation.

Compared with Jan Łomnicki’s earlier adaptation, Akcja pod Arsenałem (1977), Gliński’s reinterpretation is more focused on the Grey Ranks’ military deeds, which culminated in Operation Arsenal – an attack on a Nazi convoy in Warsaw to liberate their comrade Rudy (Tomasz Ziętek). Kamienie na szaniec is certainly more gut-driven than its predecessor. The Gestapo interrogation scenes in Łomnicki’s version look gentle compared to the brutality in Gliński’s adaptation.

Shot like a Hong-Kong action movie, without the slo mo, Kamienie na szaniec has the potential to attract action movie aficionados and young moviegoers alike.