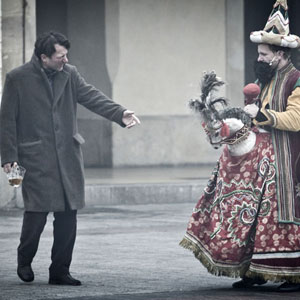 In Pod Mocnym Aniołem (The Mighty Angel), Wojciech Smarzowski employed the same pack of supporting actors who appeared in Drogówka (Traffic Police, 2013). The characters in the two movies don’t seem to differ much either, although the debauched Varsovians featured in his traffic cops burlesque appear slightly more sober than their Cracovian counterparts.

Jerzy Pilch’s reputation as one of the greatest alcoholic novelists on the old continent will certainly be boosted as a side effect of Smarzowski’s adaptation and Więckiewicz’s vigorous performance in the role of Pilch’s alter-ego. Since drinking is an atavistic vice, Pod Mocnym Aniołem is an empathic ode to alcohol from different generations, including the most aged guzzlers who failed to adjust to capitalism.

The abrupt transitions in editing, as devised by Paweł Laskowski, are the best choice to highlight the sudden tailspins of the protagonists immersed in a non-linear narrative, enslaved to vodka, violence and perfunctory rear-entry sex. This time, Smarzowski deliberately overuses 360-degree pans to convey Jerzy’s sense of nausea and alcohol-induced vertigo against an ever-changing background in Krakow.

Pod Mocnym Aniołem clearly shows how turning the tables on alcohol is a Sisyphean task that requires frequent stays in rehab centres. Smarzowski has uncompromisingly continued to build a cinematic catwalk for the social outcasts of his native country. His lack of exposure at international film festivals has become more and more regrettable.