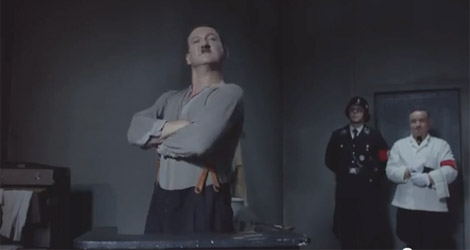 Nazis have been lampooned before in Polish cinema, but the October 18 release of Ambassada will mark the first comedic portrayal of Hitler himself in the nation’s cinematic history.

Ambassada, directed by Juliusz Machulski, is a time-travelling romp that sees two 21st-century Warsaw urbanites transported to August 1939 – the last days before the Nazi invasion that sparked World War II.

Moving into a new apartment, Melania (Magdalena Grąziowska) and Przemek (Bartosz Porczyk) discover that their building was once the German embassy, and taking the lift to the third floor whisks them back to the time when Nazi troops goose-stepped down corridors decked with swastikas.

When the Führer himself, played by veteran screen star Robert Więckiewicz, pays a secret visit, the race is on to prevent the most tragic event in Poland’s recent history.

The comedy is broad, with the most hated man in Polish memory cast as a buffoon chuckling at trashy novels while siting on the toilet. Because the time portal is two-way, Gestapo agents and Hitler’s Foreign Affairs Minister, von Ribbentrop (played by Death Metal star, Adam ‘Nergal’ Darski) are released onto the streets of present-day Warsaw.

Seventy four years after the September 1 Nazi invasion of Poland, Hitler remains the most despised figure in Polish memory. World War II devastated Poland like no other country. By its end, six million Poles were dead and many cities lay in ruins.

One thought on “A Polish Comedy… About Hitler”