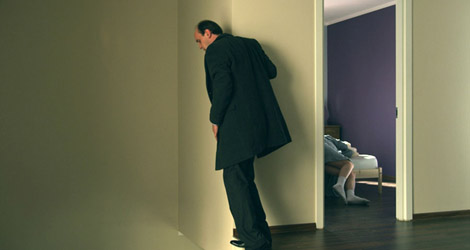 For his much anticipated return to filmmaking, Sławomir Fabicki has taken inspiration from a real-life story about a case of sexual abuse in the halls of Olsztyn city council reported by the husband of the molested woman.

The opening sequence of Miłość (Loving, 2012) shows a sparrow in its death throes trapped in the bathroom of Marysia (Julia Kijowska) and her husband Tomek (Marcin Dorociński). The director doesn’t seem to be giving pregnant Marysia a glimmer of hope. The tone is even more pessimistic than that in Michael Haneke’s recent masterpiece Amour (2012) in the scene where Jean-Louis Trintignant releases a pigeon that has become trapped in the old couple’s apartment.

Fabicki has indisputably wrung the best from his cast. Kijowska, who received the best actress award at the Thessaloniki Film Festival, never loses intensity during the movie and Adam Woronowicz in the role of Marysia’s stalker comes as close as possible to evoking sympathy in the audience. Dorociński, who has now paired with Kijowska in several films, is also on exceptional form here.

As in Fabicki’s incisive debut feature Z odzysku (Retrieval, 2006), the characters forlornly struggle to support each other, and eventually manage a kind of return to humanity despite their despair. The somewhat conciliatory finale suggests that the wounds in the couple’s relationship may finally be healed.