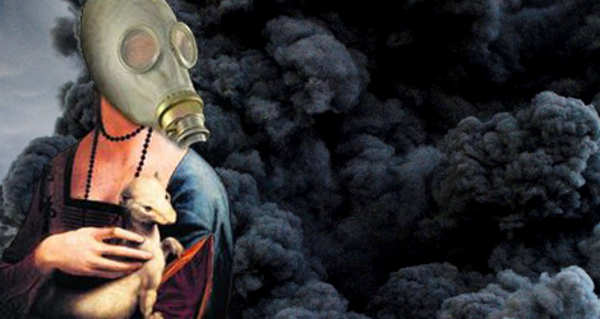 It is impossible not to notice the thick smogs that periodically blanket Krakow, or to wonder what they are doing to your lungs, but even on seemingly clear days the city’s air is among the most polluted in Europe with levels of contaminants frequently exceeding World Health Organisation safe limits.

Krakow is now firmly established as one of Europe’s top tourist destinations, attracting 15.8 million visitors in 2013. Multinational companies are flocking here, as are young people unable to find jobs elsewhere in Europe. How long before awareness of the city’s poor air quality begins to make the city unattractive, threatening its economic health as well as the health of the people who live here?

According to the air-pollution activism group Krakowski Alarm Smogowy (Krakow Smog Alarm), the city has some of the poorest air quality in the world. 2014 figures from the World Health Organisation rank Krakow as 215/1624 cities globally that record annual mean concentrations of PM2.5 in their air.

PM2.5 (particulate matter smaller than 2.5 microns, like toxic organic compounds and heavy metals) and PM10 (smaller than 10 microns, such as most factory smoke) are monitored because they have been shown to be a major cause of asthma, lung cancer, cardiovascular problems, respiratory diseases, birth defects and premature death. A 2013 study across nine European countries that for every increase of 10 μg/m3 in PM10, the lung cancer rate rose 22%—for every 10 μg/m3 increase in PM2.5, which can penetrate more deeply into the lungs, it rose rises by 36%.

Placing these figures in perspective, it is important to note that many cities in the world that probably have worse air quality than Krakow’s do not officially record pollution levels. In other words: ‘where annual mean concentrations are recorded’ does not include what are probably the most polluted cities globally.

Despite this small consolation, Cracovians have become increasingly aware, and angry, about the quality of their air. Krakowski Alarm Smogowy was formed in December 2012, and as of November 2015 has amassed 31,000 followers on Facebook. Describing itself as an: “apolitical, public initiative of Cracovians who want to live in the city and breathe air that is safe for their health and life,” the group has also created several popular online petitions, the most recent of which was presented to new President Andrzej Duda on a visit to the city.

How bad is it? 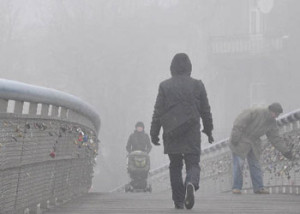 According to measurements taken by the Małopolska air monitoring network, the problem is very bad indeed. The network consists of 11 monitoring stations in the region, three of which are in Krakow (Al. Krasińskiego, ul. Bujaka, ul. Bulwarowa). Nine different pollutants are measured every day and their levels are reported on the network’s website.

Krakowski Alarm Smogowy republishes these figures on its Facebook page, and points out some worrying trends: “In December 2012, residents of Kurdwanów could breathe safe air on only three days of the month, while in the city centre there was only one day with safe air.” In November 2015, pm10 levels have reached 281,2 µg/m3, over 540% “normal” levels— though research has shown that any level is risky.

Particulates are not the only problem. Levels of highly carcinogenic benzo[a]pyrene and nitrogen dioxide, which has been shown to inhibit lung function, are also high. Unsafe nitrogen dioxide levels are only recorded in three Polish cities: Warsaw, Wrocław and Krakow. 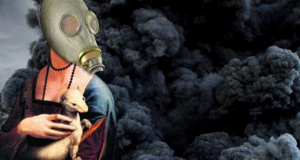 Two things work against Krakow’s air quality: pollution and geographical factors that prevent the dispersal of pollution. The two major sources of the most harmful pollutants are domestic solid fuel furnaces and motor vehicles, but local industry and air-borne pollutants from other parts of Poland and neighbouring countries also contribute.

Geographically, Krakow sits in a valley, which tends to concentrate pollutants, and experiences a low number of windy days, which means pollutants are not readily dispersed.

Clean air activists are focusing on the problem of domestic solid fuel furnaces as a major source of pollution, and one that could be eliminated relatively easily. Only about 10 percent of Krakow’s households use solid fuel furnaces for heating. Unfortunately, these furnaces are also frequently used to incinerate domestic waste, which is probably the leading cause of the most harmful pollutants. The problem becomes particularly visible during the winter heating season – always the period that sees the most extreme particulate and benzo[a]pyrene levels.

According to Krakowski Alarm Smogowy: “The fact that [10 percent of Cracovians] are not connected to the municipal heating network should be seen as a considerable defeat in Krakow’s development.” The organisation claims that: “A total ban on solid fuel burning in domestic furnaces constitutes the optimal solution, with the greatest ecological effect. It would allow for such a significant reduction in PM10s and benzo[a]pyrene that the problem of air pollution in Krakow would be solved.”

Bans of this kind have been successfully introduced elsewhere to tackle air pollution, most notably in the United Kingdom in 1956 (the Clean Air Act), and Ireland between 1990 and 2003. Outlawing the use of ‘smoky’ coal in Dublin in 1990 is believed to have resulted in 350 fewer deaths annually, and a 20m Euro saving in public health costs.

The obvious barrier to this solution is that it would deprive a significant number of Cracovians of their only source of domestic heating. Finding the money to provide these people with alternatives, or to offer subsidies to allow them to find their own alternatives, is a problem in a city that is already in a prolonged budget crisis.

Krakowski Alarm Smogowy recognises this problem but suggests that: “Local authorities should define a transition period (e.g. five years) and secure subsidies for the replacement of coal furnaces with sources that do not contribute to air pollution. Krakow should also develop a support programme for the poor in order to minimise the risk of fuel poverty.”

In October 2015 President Duda signed a revised environmental law, with the support of Krakow Mayor Jacek Majchrowski, aiming to rid the city of coal furnaces by 2019. It ends a period of back-and-forth struggle between the The Małopolska regional assembly and the Supreme Administrative Court, which had blocked an earlier resolution.

Yet the problems of funding and enforcement remain. Krakow has had a programme subsidising the replacement of solid fuel furnaces for many years, but it is proceeding at a glacial rate. Krakowski Alarm Smogowy note that, at the current rate of replacement, it could be decades before the last domestic furnaces are gone. One problem is that poorer Cracovians are unenthusiastic about getting rid of their coal-burning heaters, even with financial help, because it will simply result in higher fuel bills for their new heating system.