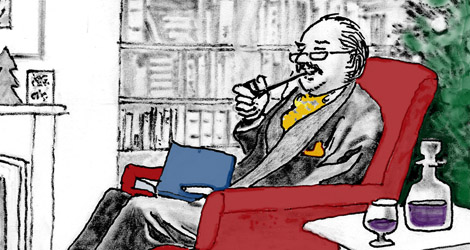 Krakow-based cultural historian Zdenek Macarthy has been conducting a study of Poles and their cultural icons, from the realms of both fact and fiction. It’s not often, says Professor Macarthy, that a new star can be added to the Pantheon of Polish heroes, but this is exactly what seems to have happened very recently. This follows the fascinating claim from Portuguese academic, Manuel Rosa, that Christopher Columbus, far from being the Genoese navigator of renown, was actually of Polish descent. The reaction of some Poles was very revealing, says Professor Macarthy.

The eagerness on the part of many to adopt a famous historical figure is understandable, he says, considering that even those historical figures known to have been indisputably Polish are not always safe from the advances of interested parties from other nations. A prime example is the astronomer Copernicus. Known in Poland as Kopernik but elsewhere by his Latinized name – since it reflects his universal character – he has been claimed by some Germans as one of their own even though he was born in Toruń as a subject of the Polish king.

Copernicus may have been equally fluent in Latin, Polish and German but some famous Poles, whose mother tongue was undoubtedly first and foremost Polish, have suffered from misattribution of national identity. Both Marie Curie and Fryderyk Chopin are often portrayed as French with only the vaguest suggestion of a Polish connection.

When it comes to the realm of fiction, the phenomenon of misattribution can be found in equal measure, says Professor Macarthy. He cites the story of three friends from the ancient university city of Krakow that has echoes in some of the best-known 19th and 20th century writing.

The three were students at the Jagiellonian University in the 1860s. Professor Macarthy sources his information from the newly discovered papers of Jan Onufry Wojciechowski, a medical student and the youngest of the three, who kept a diary throughout his life. He befriended Jan Walerian Prus-Paszkowski and Włodzimierz Weissberg at the university’s fencing club and the three became inseparable.

The diaries recount their escapades in a style owing much to Alexandre Dumas, caricaturing local innkeepers, lampooning lecturers and generally having fun at the expense of the older generation. Indeed, their friends called them the ‘Three Musketeers of Krakow.’

The good times were cruelly interrupted by the outbreak of the 1863 Uprising, another attempt to throw off the yoke of Imperial Russia. All three volunteered to fight with Traugutt but their individual paths separated. The friends lost touch, but Wojciechowski’s diary picks up the threads decades later from his viewpoint as a political exile in London.

Jan Walerian Prus-Paszkowski, who had broken off his language studies to join the fight, was captured in Warsaw by the Russians. He made a spectacular escape from a line of chained Polish soldiers who were trudging eastwards, destined for Siberia. Always very athletic, he somehow managed to free himself from his shackles and, while the prisoners were crossing a river in Belarus, jumped off the bridge and disappeared under the waters. The guards gave up firing when he didn’t surface.

How he survived is not made clear but Wojciechowski tells us that he made his way south towards Zamość, then back to his native Krakow where he was able to rest before striking out for a new life abroad. He travelled to Vienna, where, with his knowledge of languages and sporting skills, he supported himself variously as a fencing instructor, a Latin tutor, and even, at one point, a tight-rope walker. There is mention of an affair with the wife of a professor of gymnastics and he was compelled to leave Vienna under a cloud.

Prus-Paszkowski next surfaces in Paris in the 1870s. Here, no-one can pronounce his surname and he becomes, inevitably perhaps, ‘Passepartout.’ This is the very same Jean Passepartout, Jules Verne’s ‘gentleman’s gentleman,’ who accompanies the most phlegmatic member of London’s Reform Club, the unflappable Phileas Fogg, on his memorable journey around the world.

The fact that the Mexican actor Cantinflas portrayed him in the spectacular 1950s film version of the novel as a loyal but slightly erratic Spaniard rather than Verne’s insouciant but sometimes pugnacious Frenchman, serves not only to underline the contrast with David Niven’s wonderfully British Fogg, but also perhaps reflects the fact that he was known to have been of a nationality other than French. Cantiflas certainly portrays Passepartout as having an eye for the ladies – perhaps a relic of the real character.

The second of the Krakow ‘Musketeers,’ chemistry student Włodzimierz Weissberg, after distinguishing himself in the fighting under General Hauke-Bosak, was not as lucky as Prus-Paszkowski. He found himself in Russian captivity, languishing in the depths of Siberia. After six years in inhuman conditions he managed to escape in the company of several others and undertook an unbelievably arduous journey through the wilds of Kazakhstan, Uzbekistan and Afghanistan until they reached a British outpost in India. Of the initial group of eighteen escapees, only five survived.

Wojciechowski met up with his old friend Weissberg after the latter had managed to make his way to England. Wojciechowski says he was brought close to tears by the sight of his emaciated friend. He was clearly moved by the story of Weissberg’s experiences and he adds that they seemed to have affected his mental equilibrium. His old friend exhibited signs of eccentricity he had never noticed before, but, Wojciechowski, as a medical man, had every hope that Weissberg would make a full recovery in due course.

The happy ending to Weissberg’s story is that he managed to contact an uncle who had emigrated to the United States many years before and then joined him in New Jersey, married a fantastically rich heiress and founded a confectionery business in Trenton. This became, in time, exclusively devoted to manufacturing European-style chocolate and Weissberg became unimaginably wealthy. He lived a long and prosperous life and had a large family. Readers may already have guessed that, according to Professor Macarthy, he became the model for Roald Dahl’s famous Willy Wonka.

As for the diarist himself, Jan Onufry Wojciechowski, his experiences were rather similar to Prus-Paszkowski’s, except they took him north rather than south. After the collapse of the insurrection, Wojciechowski managed to avoid Russian captivity by hiding in the forests and making his way toward the Baltic coast. From Gdańsk he travelled by sea to Copenhagen and from there to Sweden. From Gothenburg he took ship for Gravesend and after a stormy North Sea voyage, arrived alone, hungry and penniless, but free. He was initially cared for by the Polish Veterans’ Association in London and resolved to stay in England, resume his interrupted medical studies and make his living practising medicine.

He finished his studies and then worked for many years as a surgeon in the British Army, a calling that took him as far afield as India. In time, Wojciechowski became more English than the English, eventually changing his surname to Watson. He is known to history as Sherlock Holmes’s trusty friend, assistant and chronicler.

All this would only have gone to prove that fiction continues to be stranger than fact, but, unfortunately, some pedantic individuals are now pointing out that the source of these revelations, Professor Zdenek Macarthy, may himself be a figment of someone’s imagination.

3 thoughts on “A Tall Tale for Christmas”