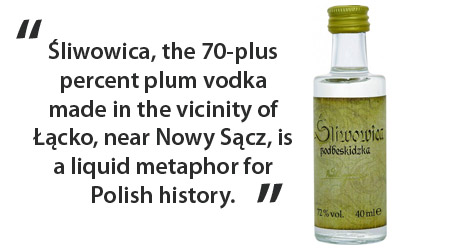 A renowned Polish moonshine has been struggling to achieve legal status for 20 years. Now, one local fruit producer has made it through the legislative minefield.

Śliwowica, the 70-plus percent plum vodka made in the vicinity of Łącko, near Nowy Sącz, is a liquid metaphor for Polish history. It is a traditional Polish Highlander’s tipple perfected by a Jew who was killed by Nazis and had his distillery closed by Soviets. It is officially illegal, but known and praised across the country and beyond.

According to reliable sources, śliwowica is the fourth strongest alcoholic drink in the world, coming after rectified spirit, Everclear and Absinthe. Plum vodkas are popular right across Central Europe, but the variety produced in Łącko is the one that wins the international awards, despite being illegal.

Traditionally, the region’s śliwowica (Śliwowica łącka – ‘śliwowica from Łącko’) has been distilled in small quantities by hundreds of ‘home producers.’ This is, unsurprisingly, frowned upon by the authorities, but has been impossible to stamp out.

Since 2011, the term ‘Śliwowica łącka’ has been registered as a trademark by a local association of fruit farmers, and police have largely stopped pestering producers, though its manufacture and sale remain technically illegal. Farmers are now entitled to apply to a board for permission to use the name, but, unfortunately, the board has not yet been constituted. A legal limbo persists, and śliwowica distillers are carrying on as normal.

Oddly enough, being an illegal product hasn’t prevented forgers from copying it. False śliwowica is sold across the region, especially in tourist hot spots such as Zakopane. It is made from cheap spirit with added plum flavouring, which means it is potentially deadly. According to Zakopane police, there has been at least one death from fake śliwowica in the last year. Buying genuine plum vodka requires time and effort since locals are reluctant to reveal their sources.

Attempts to legalise the production and sale of śliwowica have been going on for 20 years. According to the press office of the Ministry of Agriculture, the decision would require a consensus between the Ministries of Treasury, Health, Economics and Agriculture, and would have to comply with excise tax law and anti-alcoholism legislation.

“We need to finalize legalisation. In the current situation, all parties lose: the producers, the customers and the state,” said former Łącko district head, Franciszek Młynarczyk, who has been pleading śliwowica’s case to politicians for decades. “Legal production could be combined with agro-tourism. We could open up a local store, under our society’s auspices, and local manufacturers would compete with the quality of their products,” added Młynarczyk’s deputy, Stanisław Myjak.

National authorities and local producers disagree about the future of their famed firewater. If the government did agree to legal production, it would have to be at a single distillery in the region. This is a big no-no for local farmers – each one has their own secret recipe for śliwowica and they want the government to approve home-made production, supervised by the tax office.

“We like the solution used in Austria, where fruiters produce śliwowica under a 50 percent excise tax, as long as state limits are kept to,” said Janusz Klag, the new Łącko district head, adding that all other EU countries have managed to regulate this area.

There is one man in the Łącko area who need not be afraid of making and selling plum vodka. In November 2012, local fruit producer Krzysztof Maurer was granted a permit to produce fruit distillates, including from plums.

“I wanted to do everything legally, but the reluctance of the politicians has forced me to launch sales on general terms. Because I had to comply with strict regulations, my production is not as cost-effective,” said Maurer, who went through a complicated, three-year legalisation procedure. A bottle of his plum vodka costs about 70 zloty, because it is liable to 100 percent excise tax. Maurer’s product is called ‘Vodka from Łącko plums,’ since the name ‘Śliwowica łącka’ is restricted.

“My name is enough to guarantee the quality of the product,” said Maurer. “I’m a local man and my family has known the recipe for generations. Perhaps, if the regulations change, I’ll apply for the name ‘Śliwowica łącka,’” he muses.

One thought on “The Bootleg Polish Vodka that Conquered the World”