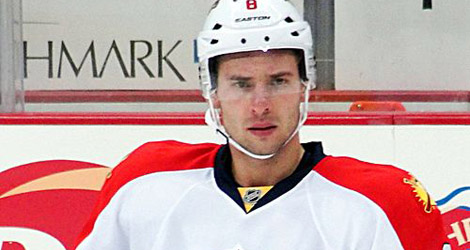 The match-up will be the second meeting between the teams since Wolski joined the PLH champions, the first of which Sanok won 2:0. The Krakow Post had an opportunity to speak to Wolski on Monday as Sanok practiced in Krakow.

Wojtek Wolski is a Polish-Canadian ice hockey player born in Zabrze who emigrated with his family to Canada when Wojtek was a child. He has played with five NHL clubs, notably including the Colorado Avalanche, where he recorded his best seasons.

It was with the Avalanche that he scored 50 points on 22 goals in 2005–06. He is widely regarded as having the potential to become a major NHL star, but has been troubled by injury for the past two years and not yet had the opportunity to appear with his new club, the Washington Capitals, due to the on-going labour dispute in the NHL.

There is no end to the NHL lockout in sight. Wolski, like many other NHL players, has opted to play in Europe during the stoppage, but is the only one to have chosen the Polish top league, where he signed with KH Sanok in October. He has played in hundreds of NHL match-ups, including 29 Stanley Cup playoff games.

Sanok has just returned to Poland after playing tournament matches against the league champions of Norway, Belarus and Kazakhstan over three straight days this weekend, and will face Cracovia after only one day’s rest.

Sanok lost all three matchups, but saw some promising developments as Wolski began to play to his own high level. The 26-year old had seen less ice time in North America over the past two seasons due to his injuries, then got off to a slow start in his first few matches in the PLH, but appeared to have broken his slump, winning accolades with impressive hustle that paid off with three goals over the weekend.

Wolski looked very impressive in practice on Monday, and was very upbeat after the tournament, “Yeah, I’m feeling good,” he said. “Sometimes I’m feeling like myself again, which is really nice,” referring to his excellent play of earlier years.

From Wolski’s perspective, the tournament in Stavanger over the weekend was a success, despite the losses, in part because the effects of the new system introduced by head coach Sztefan Mikes began to show. Mikes replaced Milan Stas when the latter accepted a more lucrative position in the Slovakian league earlier this month.

Wolski appeared pleased that Mikes, in his words: “is less about the ‘ring around-the-rosie’ kind of hockey people are used to here. It’s more about bringing the puck to the net, finishing your checks, playing hard – the way hockey is supposed to be.”

Nevertheless, Wolski declined to offer a prediction for today’s match against Cracovia, who have their own recent successes to point to with four championships in the past six years. Cracovia still boasts Poland’s perennial top scorer and points leader, Leszek Laszkiewicz – younger brother of team captain Daniel Laszkiewicz, and the team has not lost on their home ice since their first league match in August.

The challenge facing the Cracovia squad and their canny goalie Rafał Radziszewski depends significantly on whether Wolski is really ready to play to his full potential, and whether the weekend tournament action has taken the wind out of Sanok’s sails or forged them into an even tougher unit.

Asked whether – if the NHL lockout were to end today, returning him to the Stanley Cup-contending Caps – Wolski would feel any regret about leaving, he emphasised the bond he had developed with his teammates, and the refreshing experience of playing in the country of his birth.

“At home, with the lockouts and everything, it’s just depressing. I had an injury, and right after that there was another injury. Being here has been a terrific experience. This is really a great group of guys. I think playing with these guys has taught me to like hockey again.”

The puck will drop at the Cracovia ice arena at Siedleckiego 7 on Tuesday November 27 at 18:30. Tickets are expected to go on sale at 16:30 at the rink box offices. Rink officials predict long lines near game time.