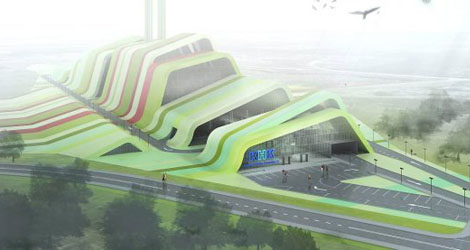 The artist’s impression depicts a radically modern looking building with a green-clad, sloping roof. Stripes resembling the pattern of crops or mown grass add a rustic touch. But it’s what is inside that really matters – a waste incinerating facility with a promised output of 8 MW, equal to the energy used by Krakow’s trams or its street lighting, plus 35 MW of heat.

Expected to cost 645 m złoty, Krakow’s planned thermal waste processing plant, to be built on a brownfield site in Nowa Huta, has broken records as the most expensive, difficult and painstaking municipal project ever undertaken in Krakow.

So far, there have been several lawsuits and a complaint to the EU Commission, the bankruptcy of a winning contractor in the middle of the tender process, and a court ruling revoking the project’s building permit due to errors in the paperwork.

A spark of pride for Krakow

“The incinerator is a great success for Krakow. It will allow us to meet strict EU limits concerning waste disposal and will also pro- vide new jobs and guarantee the city’s energy security,” said Mayor Jacek Majchrowski on signing the construction contract with South Korean contractor POSCO.

Krakow’s waste incinerator will be the first in Poland to be built using state-of-the-art technologies, and will deal with 220,000 tons of solid waste per year. Un-recyclable by-products will take up five times less landfill space than is currently used annually. The city’s rapidly filling waste dump in Barycz will gain more than 30 years of operation usefulness as a result.

The project has received a grant of 385.5 m złoty from the EU Infrastructure and Environment Programme, the largest EU Commission subsidy ever granted to a public facility. The remaining 275 m złoty will come from a commercial loan to KHK, which will fund repayments by selling the heat and electricity generated by the plant.

Krakow has also gained valuable know-how, and the development procedures that have been hammered out have become a pattern for other cities in Poland wanting to build their own incinerators. This applies both to the project’s concern for green considerations, but also the ways it has found for securing community support through a social agreement between the mayor and local residents.

This formidable peak of achievement has not been reached without a few slip-ups. When the first rumours of a waste incinerator appeared in 2004, it immediately sparked protests from local residents and ecologists. The city then turned its attention to waste sorting and recycling, but in 2007 the Ministry for Regional Development added the proposed incinerator plant to a batch of projects to be co-funded by the EU, and the plant again became the talk of the town.

All four locations considered for the plant were protested by locals, and hasty negotiations and an information campaign failed to convince the sceptics. Opponents of the plant blocked streets and protested at the law courts several times. They also launched an anti-incinerator website, a PR campaign and sent a petition against the plant to the EU Commission. After two years of delicate negotiations, Mayor Majchrowski promised to carry out a raft of more than 50 development and revitalisation investments in Nowa Huta, though this process was slowed by the global economic crisis and the city’s debt problems.

A hardcore of opponents continue to protest and petition the courts. “Our veto is rooted more deeply than a pathological discontent, namely in facts and citizen responsibility,” wrote protesters from associations in Zielona Mogila and Łąki Nowohuckie to Mayor Majchrowski in May of this year. They fear a deterioration in living conditions and threats to the environment. “Obtaining local inhabitants’ acceptance of the plant’s location was attempted by a so-called compensation agreement with the local council,” they wrote, condemning this deal as: “not a wise, rational compromise.”

KHK believes these protests are not representative of public opinion. “According to our surveys, 80 to 90 percent of Cracovians are in favour of the waste plant. Over time, the group of active protesters has shrunk to no more than five or ten people,” claims Jarosław Gurbiel.

Local residents will continue to have the right to object to all legal permits relating to the waste plant until the investment is complete. Since the EU became the spiritus movens of the plant, with the huge carrot of subsidies, and the stick of penalties, time has been against the project – any significant delay caused by court orders or natural disasters would result in having to return the money. And this would be a major blow to Krakow’s budget.

“Of course there are still many permits to be obtained and arrangements to be dis- cussed, and any stage might be obstructed by our opponents, but the construction itself will not be stopped,” says Gurbiel, who also revealed that the investment will soon be granted a building permit. The first flames are due to be kindled in the plant’s incinerators in the autumn of 2015.