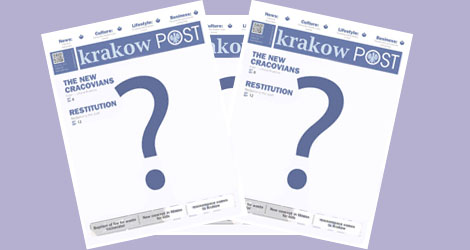 November 15, 2012 will be a big day for the Krakow Post. After 95 issues covering events, news and the city’s ever growing international population, Krakow’s only English-language monthly is morphing from a newspaper into a magazine format.

The new look Krakow Post will be easier to handle – smaller in size, but with more pages. Inside, it will be as good as ever. Managing Editor Jamie Stokes has been in the job for two years now, and plans to continue the drive to make the Krakow Post the voice of the city’s foreign community.

“My goal has always been to bring the city and the non-Poles who live here closer together. Not everyone has the time or the inclination to become proficient in Polish straight away, so we bring them local news in the international language – English. If you don’t know what’s going on in a city, you can never really be part of it.”

“It’s also important that we tell native Cracovians about the international community in their midst, and what we’re up to. There are dozens of nationalities living in Krakow, and they add greatly to the city’s store of cultural and economic wealth. We’ve chosen to live here because Krakow is a great city – I want Poles to know that not all those foreign voices they hear around town belong to tourists.”

Marta and Mark Bradshaw of Lifeboat Ltd., who have owned the Krakow Post since 2008 and also run Cracow-life.com, have taken the decision to concentrate on new business ventures (watch this space) and have handed the reigns over to Krakow Media to produce and publish the Post.

Krakow Media’s Managing Director David McGirr said: “I and the rest of the editorial team have been involved with the Krakow Post for many years, and we’re very excited to now have the opportunity to evolve the magazine in new directions.”

The new format Krakow Post will be unveiled on Thursday evening at a launch party to be attended by representatives from every branch of Krakow’s international family. Extending an invitation to expats and locals alike, David McGirr said: “So far, there are well over a hundred people from 32 nations coming to the party. If you’ve ever read and enjoyed the Krakow Post, or want to know what it’s all about, come and join us – Buddha Bar II, 8pm, Thursday November 15.”