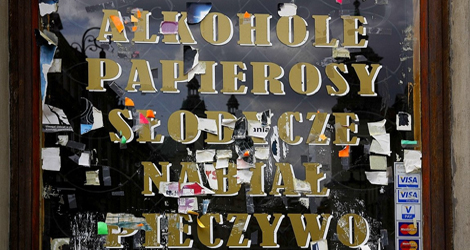 When  you go for a night out in Krakow, do you head for a club or a klub? What about the grocery run… do you stock up at the shop or at the sklep?

As an international city, welcoming tens of thousands of tourists from all over the world each year, and with a sizeable population of medium and long-term expats living, working and studying, does Krakow have a responsibility to make  information about services and facilities understandable to as many people as possible – or does the ‘shop’ sign in place of the ‘sklep’ pose a threat to the Polish language and  discriminate against the local population?

The Krakow edition of the newspaper Gazeta Wyborcza took on the issue of language, and found that, while there was some support for using English to attract trade and benefit from Krakow’s cosmopolitan nature, others  saw the use of languages other than Polish as ‘snobbism’.  Some even argued that, by using English instead of Polish, businesses in the city could lose customers as Poles – the majority nationality in Krakow – seek goods and services at establishments that use the Polish language either primarily or in some cases exclusively.

Shop owner Anna Michułka told the newspaper that she heard English more often than Polish in her shop. She added: “Many small businesses need to attract foreign tourists.”

But Dr Katarzyna Kłosińska, secretary of the Polish Language Council, said: “To a large extent this is due to snobbery. Polish companies want to have an international character, which is understandable against the background of the general trend. I also understand that bilingual names appear in the market squares in Krakow or Warsaw, but I find it bizarre to name service points, such as for a cobbler or ice cream, only in English.”

15 thoughts on “English or Polish in Krak(ó)w?”