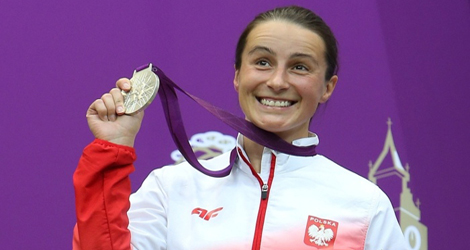 She was among the great hopes of Poland for glory at the London Olympics, but Agnieszka Radwańska fell at the first stage – being beaten convincingly by 24th-seed German Julia Goerge.

Radwańska carried the flag at the head of the Polish team in the opening ceremony on Monday – a decision she may now regret, as no Polish flag bearer has won a medal at the games since 1992. The curse struck again in the first round, when Radwańska, runner-up at this year’s Wimbledon tournament, found herself back on centre court at the world’s most famous tennis venue. She lost 7-5, 6-7 (5), 6-4. She will now compete in the doubles, partnered by her sister Urszula.

Fencing hopeful Sylwia Gruchała also made a shock early exit, losing in the first round. She was beaten 8:9 by Kanae Ikehata, of Japan. And the rowing team in the men’s lightweight four event were eliminated early on too.

There is still hope for others, though, including the volleyball team, who beat Italy 3-1 in Pool A.

But, for the time being Syłwia Bogacka (pictured) – with a silver in shooting – is the sole Polish medal winner.