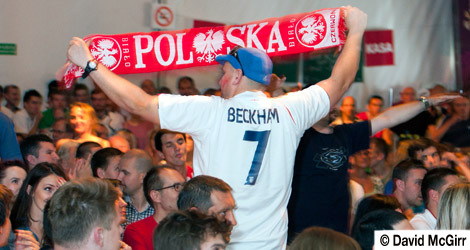 The Euro 2012 tournament is over, and Poland is looking back on the enormous logistical undertaking that it involved with deserved satisfaction. The impressions left on audiences abroad may, however, be less positive because of the manner in which the images and stories were filtered through the world’s press.

It is, of course, the nature of journalism to report the shocking. When BBC journalist Chris Rogers came to Poland and the Ukraine to film the documentary Stadiums of Hate, his team recorded material that fit the category. The terrifying images it contained set the tone for the coverage for weeks to come. Among the foreign press corps, the anticipation of race-related trouble was the topic of much excited discussion.

For most viewers at home, nothing would be reported to dispel those disturbing images. The subject bubbled to the surface when the Dutch side was taunted by a group of Euro opponents at their first open training session. In a frenzy to make an incident that was certainly offensive and tasteless into a major scandal, the international press convened around Krakow’s many bars and developed a version of the story that was to prevail, despite being largely false.

The version of events that was related stated that Poland fans from Krakow were protesting the omission of the city as a venue for matches. In fact, the opposite was true. The ‘ultras’ of every major club in Poland viewed the international tournament as a playground of the elites, and had called for a general boycott.

The handful of Wisła Krakow fans that turned up that day were protesting against the use of their stadium in conjunction with the tournament, and spent the bulk of their time there chanting “F*** Euro,” which is also the colourful name of their nationwide campaign of contempt for international football and the casual fans that enjoy it. Reporters could easily have learned this from local people, or from the many web sites where these organisations have expressed their views.

The story also broke on the day that the England side visited Auschwitz, which presented an irresistible temptation to draw parallels between the nightmare of industrialised genocide committed by the German state, and the behaviour of a group of Polish teenagers making ape noises at a public event. While it was not unfair to voice a full-throated condemnation of prejudice in any form, there was, for me, something unsettling about the failure to draw a clear line between the German perpetrators of a horrendous historical crime and the Poles, who were among their victims.

Then the first real public disturbance took place in Warsaw. I was working with a British television crew on the day of the provocative Russian march across the Poniatowski Bridge. The temptation to make trouble proved to be too great for some of Warsaw’s youths – a motley union of supporters of the city’s two largest clubs and a handful of ultra-nationalists numbering, by my count, no more than a hundred and fifty individuals. This was sufficient to keep a troop of several thousand police occupied all afternoon and to do serious injury to a few unfortunate Russians, who were beaten mercilessly in front of me. The crew I was working with diligently filmed the action. All around us, however, fans on both sides walked arm in arm to the stadium, and Poles approached Russians to apologise for the behaviour of the ‘rabble.’

The pitch of apology reached its crescendo the following week, when Russian fans told Sports Illustrated that they had been approached with apologies thirty to forty times on the day of the festive Russia-Greece match.

These two incidents constituted the entirety of the activity from the ‘dreaded’ Polish hooligans. Despite all the hype, there was never any real possibility of trouble at the matches themselves. This was largely because ticket distribution favoured lotteries run by sponsors, and also because hard-core club fans are sickened by the family-friendly atmosphere at international matches. For them, football is not about sport. It’s about flaunting social norms. It’s about fireworks. It’s about screaming insults in unison at the referee. For a few of them, it’s about fighting.

As a colleague succinctly put it, the stadium is for them a ‘cauldron of identity.’ This is their idea of fun, and it is precisely the reason they stayed away from the tournament. The crowds at the matches were dominated by the same hospitable, good-natured, increasingly optimistic middle class Poles that the ultras dread, because they know that it will inevitably extinguish the culture of their stadiums.

So where was the hate that Mr. Rogers put on such spectacular display in his exploitative programme? Did it really exist as advertised? Or was the tournament just an eclipse, with more sickeningly insensitive behaviour to come as soon as it passes? Truthfully, it would not be easy to find in the form shown on Panorama in any case.

Mr. Rogers chose two derby matches between the most virulent and violent rivals in Poland to film, and both of them include teams that colloquially refer to themselves or one another as ‘the Jews,’ both as a matter of pride and an epithet. In the confusing storm of symbols that ensues, a picture could be and was painted that appears more dire than it is. I have personally been to over a hundred sporting events in Poland, and have never heard a racist chant.

The question of what is to come is not a particularly sensational one, as the international sports media giants move on to the London Olympics and the next collection of complimentary bars and buffets. But, for a country that was so maligned as a hotbed of hate, it will be fascinating to see if that middle class is emboldened to take control of its clubs and stadiums, and if it is able to impose social norms of behaviour in them, as it did during the largest party the country has ever hosted.