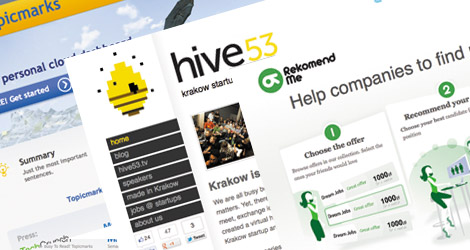 There has been a burst of new activity in Krakow’s already fertile start-up scene, but it remains under the radar of the city’s business support agencies and is flourishing despite a lack of financial or organisational support.

Krakow has become an established honey pot for global players in the business process outsourcing (BPO) industry thanks to the large number of talented and ambitious graduates coming out of the city’s universities. Now, local entrepreneurs are taking advantage of this exposure to take their ideas to the rest of the world.

The outsourcing industry isn’t all about finding people to staff call centres. Household names such as Google and Motorola have located development centres in Krakow, attracted by the large number of specialised developers and programmers. Smaller players have followed in their wake.

The explosion of mobile and web-based technologies has meant that foreign tech companies have had to look further afield to find the growing number of talented people they need. One result is that a growing number of Krakow’s software development agencies serve only foreign clients, many from the US. This has forged links that Poles are starting to take full advantage of.

There are signs that investors and entrepreneurs from traditional technology hubs such as Silicon Valley are becoming interested in Krakow. Together with a small but active crop of local investors, this is encouraging a new band of local entrepreneurs to start up their own businesses.

Hive53 is one grassroots group taking advantage of these international links. Its, more-or-less, monthly meetings are organised by local entrepreneurs Ela Madej and Piotr Nedzinski. Recognising the value of an international perspective, Hive53 meetings always include a talk from a seasoned entrepreneur with experience in the global market. Past speakers include well-known industry names such as Mike Butcher (European Editor of TechCrunch), Amanda Rose (founder of Twestival) and Nalin Mittal (CTO of Appstores.com).

Hive53 meetings also feature pitch sessions. These are usually the first chance aspiring entrepreneurs have had to stand in front of a crowd and sell their ideas in English. In a culture that places little importance on presenting ideas succinctly, being able to practise in front of a supportive crowd of peers is valuable experience.

While Hive53 is deliberately generalised there are also regular, more specialised events. These are frequently based on the BarCamp model of ‘unconferences,’ or ‘user-generated meetings’, first popularised in Silicon Valley. These events are free to attend and their modest costs are covered by local companies who are often looking to recruit talent.

KrakSpot is one example that tackles a wide range of ideas from the worlds of new media, internet technology, e-business and marketing. A second is the more specialised Techcamp, which covers subjects such as mobile technologies and cloud computing in more depth. What they both have in common are healthy attendances, free pizza and subsidised beer.

A number of start-ups have emerged from events of this kind and some are gaining traction and the interest of early stage investors both in Poland and beyond. One of the most recent successes is Topicmarks, whose technology scans text and creates a summary. Set up in 2011, Topicmarks was acquired by San Francisco-based Tagged the same year.

Topicmarks’ founders set out to create a businesses with global reach, which is what made the company particularly attractive to investors. It also makes it unusual because there is common agreement that the weakest link in Krakow’s nascent start-up scene is the lack of people with the experience of building a global business.

Rekomend.me is another Krakow start-up that may point the way forward. It emerged out of a former recruiter’s frustration with the difficulty of finding the right candidates for vacant jobs in the BPO industry. Jan Lewanowicz and his team are trying to create a business where everyone wins – existing employees earn money by helping their friends to find jobs they know they will be good at while Krakow’s BPO companies spend less on recruitment. The really exciting thing about this model is that it can be scaled up to any city where these global players operate, from India to Brazil to China.