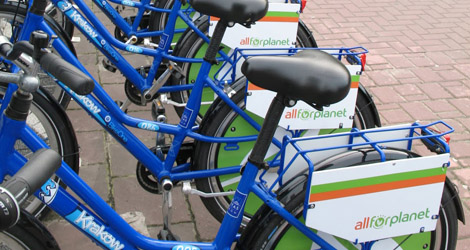 Krakow is the first city in Poland to implement a mass bike rental system – having invited bids for the right to run a much-expanded programme that will include 150 stands and 1,500 bicycles over the next three years.

The project follows the success of the bikeone.pl network, which launched in 2008 with help from European Union funding. This saw bikes installed at secured stands around the city, available for rental on a ‘park and ride’ basis. Cyclists registered with the scheme can collect any available bicycle, and return it to any free stand. The bikeone.pl project had 16 stands around the city centre, and 100 bikes. Now that the benefits of such a system have become apparent, the city wants to see many more.

Piotr Hamarnik, spokesman for the city’s infrastructure agency, ZIKiT, told the newspaper Gazeta Wyborcza: “We hope that, if the number of bikes and stands is greater than it is today, and the service benefits more people, it may contribute to a reduction in congestion in the city.”

The winning bidder will have the right to operate the service for ten years, and to earn money from both rentals and advertising. Cyclists will be able to pay at the stands, over the internet, by credit card or cash, and eventually via the new Krakow City Card.

However, cyclists commuting between the Old Town and Nowa Huta are anticipating serious problems this spring, due to road works. The organisation Miasta dla Rowerów (City for Bicycles) believes work between Rondo Mogilskie and Plac Centralny will effectively ‘cut off’ cyclists from the city centre. They have called on the city council to ensure that the route is kept clear of tools and building materials during construction work.