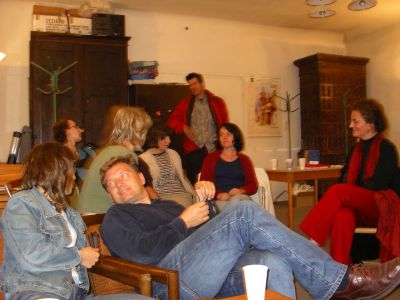 Every foreigner to stumble into Wenclub cherishes the one-of-a-kind multicultural gathering that comprises everything most loved about Krakow. Wenclub is an informal, non-profit social event where locals and tourists meet to chat in English in a homelike atmosphere. The simple lodging, with an ancient-looking tile stove and rickety furniture, opens its welcoming doors to everyone.

Tea is served with sweets.An ad at the gate invites all visitors to come inside, creating a rotating flow of newcomers that brings charm to the meetings. Such fantastic cultural variety enclosed in one room always leads to an unlimited array of lively discussions. Any subject is open for debate.”What I find best about the club is that you never know who will come next time and what the conversations will be about.

The spontaneity is great,” says Basia Sanderska.Basia has been a member of Wenclub for 17 years, but the club prides itself of an even older history. Nobody knows how the space began as none of the original members remain. Most likely a group of students thought of the space to practice their English and later invited in foreigners.Wenclub has had visitors from the U.S., Canada, the UK, France, Spain, Italy, Australia, Germany, Sweden, Holland, Korea, China and many other countries.

“Once a couple from India appeared dressed in their traditional attire, another time a group of Mormons came and tried to preach to us about their faith,” recalls Kasia Korejwo, who began coming to Wenclub in 1987. Many come back after years of absence, some send postcards. The atmosphere is irresistibly friendly.Aside from the weekly encounters, regular members organize extra events from time to time. While these are usually to mark holidays, casual bonfires are occasionally organized, as well.

“I remember an outing to Slovakia and a few sightseeing tours around Krakow,” says Kasia.Since people that come around are often keen travelers, the space has been perfect for showing slideshows of trips and experiencing even more of the world through other travelers’ eyes. Whether to practice English or to make new and interesting friends, Wenclub is certainly worth visiting.