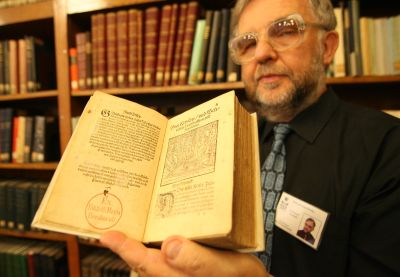 Germany has for decades asked Poland to return priceless original manuscripts of giants of German writing and composing that the Nazis hid in Poland during World War II to prevent Allied bombs from destroying.

The issue of these treasures, which have been at Jagiellonian University in Krakow since the end of the war, lies dormant for periods of time, then resurfaces. Recently German and Polish news organizations have resurrected it.At the heart of the debate over whether Poland should return the collection are the issues of cultural loss and war reparations and restitution.About a month ago the authoritative German daily Frankfurter Allgemeine Zeitung helped rekindle the debate by referring to the manuscripts of the former Prussian State Library as “the last German war prisoners.”The collection is gigantic, with tens of thousands of documents. They include original manuscripts – some autographed – from such world-famous writers and composers as Johann Wolfgang Goethe, Johannes Sebastian Bach, Ludwig van Beethoven and Wolfgang Amadeus Mozart.Goethe is one of the giants of German literature and a key figure in the Weimar Classicist Movement of the late 18th and early 19th centuries.

Bach’s religious and secular works for choir, orchestra and solo instruments were the zenith of Baroque music.Beethoven, a crucial figure in the transitional period between the Classical and Romantic eras in Western classical music, was one of the greatest composers ever. Mozart was a prolific and influential composer of the Classical era. He is still one of the most popular European composers, his works part of the standard concert repertoire.The German manuscripts are known as the Berlinka Collection because the Prussian State Library was in Berlin. In the center of the debate is a question of Poland’s rights to the former Germanic Cultural Heritage collection and Germany’s accountability for cultural losses inflicted on Poland during World War II.Before the war the Prussian library was one of the most important in Germany. It was closed in mid-1943 to protect its treasures from Allied bombing.

Nazi officials ordered the manuscripts sent to Eastern and Central Europe at the end of 1943 and the beginning of 1944.Most of the collection was hidden in castles and monasteries, places Allied bombers would be unlikely to target.

The most priceless manuscripts were hidden in the Benedictine Abbey and its two churches in the Silesian city of Grussau, which at the time was part of Germany.Delegates to the Potsdam Conference, which was called in 1945 to deal with the aftermath of World War II, transferred Silesia to Poland. Grussau’s name was changed to Krzeszow.The Berlinka collections ended up in the Jagiellonian University Library in Krakow – or the Biblioteka Jagiellonska – at al. Mickiewicz 22.

That’s where they remain. “It was fortunate that in 1945 a team of Polish librarians found part of the Prussian Library collection containing about 100,000 items in the Benedictine monastery,” said Professor Zdzislaw Pietrzyk, director of the Jagiellonian University Library. That discovery probably saved many of the most important items in the collection because “15 of the 505 wooden chests with documents were already missing,” he said.Along with manuscripts of Goethe, Mozart, Beethoven and Bach, the collection contained manuscripts of Friedrich Schiller, the German poet, philosopher, historian and dramatist, and of the composer Robert Schumann archives.The public still does not know the scope of the entire collection because a list of all the documents has yet to be published, according to a library official who asked to remain anonymous.