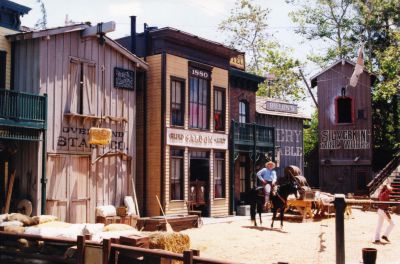 Zory officials are trying to find an investor to build an American Wild West city as a tourist attraction.They have already designated a location along Highway 81 about halfway between Katowice and the Vistula River. Now they need someone to – as cowboys would say – “cough up” the estimated 9 mln zloty needed to build the city.The city, which would be one of a handful in Central Europe, would be right out of the Westerns, with all the romantic atmosphere and rough beauty. It would boast a saloon, shops, a sheriff’s office, a jail and a bank. It would also have a working barbershop and photo studio.You would be able to watch gunfights in the city. You would also be able to learn how to use a lasso and an Indian bow. And you would be able to don warpaint in an Indian teepee.The city would have its own administration, water supply, phone network and of course a sheriff, who would make sure there was law and order.Zory officials want the city to be open all year long. They said it would require up to 100 actors for its shows.Why an Old West city instead of another kind of tourist attraction? The American West still intrigues even grown-up men and women. Every child played cowboys and Indians. A Wild West city would let them go back to those times. Zory officials point out that other cities have castles or aquaparks. Zory wanted a different kind of attraction.Wild West cities elsewhere in Poland and in the Czech Republic have proved popular. An Wild West city near Karpacz shows that such an investment, aside from being great fun, is also a profitable business. Thousands of tourists have come to one near Karpacz to show their children what life was like in the Wild West, to let them see horses, rest in a big meadow or listen to country music.But the biggest profits from the Karpacz attraction have come from corporate events and weddings.The facility accommodates hundreds of people for a big event, such as a company gathering or wedding reception.