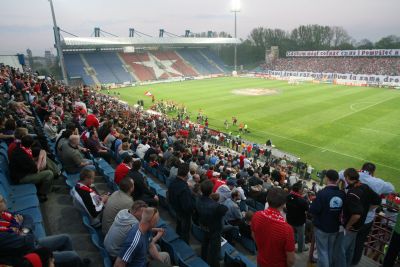 Poland’s preparations for the Euro 2012 are behind schedule. Four months after Poland and Ukraine were chosen to co-host the championships, the Polish Ministry of Sport and Tourism is sounding an alarm about meeting deadlines for contractual obligations. And two weeks after taking office, Minister of Sport Elzbieta Jakubiak has announced a new action plan. There are two issues of great urgency, she said. The first is stadium construction. The second is organizing specialists to supervise the championships. Each issue demands legislative changes, because the existing rules are defective and disfunctional. One bill would streamline stadium financing and bypass bidding processes to speed up construction. The second bill would create a company of 1,000 specialists to plan and supervise the preparations efficiently. Ministry of Sport officials hope to have such a company functioning in two months. So far, little has been accomplished. The national committee appointed to supervise preparations for the championships first had to solve the personnel problems. The Polish application for the championships proposed six stadiums in Warsaw, Krakow, Poznan, Gdansk, Chorzow and Wroclaw. Construction of some is already behind schedule. The worst situation is in the capital city. It is already apparent that the new Warsaw stadium, which is to host the grand opening of Euro 2012, will not be ready on time. And Sport Ministry officials don’t know yet where it will be placed. Minister Jakubiak intends to negotiate the 2010 deadline for stadium completion. Spring 2011 seems to be more realistic and, hopefully, equally satisfactory for European football authorities. In Gdansk, the new Baltic Arena is under construction, but a one-year delay is expected. Only the officials in Poznan and Wroclaw are confident and optimistic about the deadlines. From an economical point of view, Poland stands to be a big winner from Euro 2012. The massive infrastructure build-up in Poland will generate thousands of jobs. But the construction sector and other industry segments are already experiencing skills shortages. Poland also needs to make changes in employment legislation to open the labor market to immigration from Asia or post-Soviet countries.