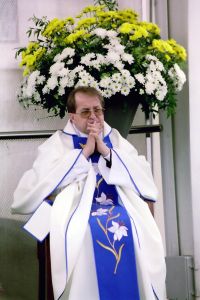 Rydzyk’s controversial remarks about Poland’s president and first lady – in which he allegedly called the president a “swindler” and his wife a “witch” – have produced protests and calls for punishment.

Father Tadeusz Rydzyk’s Catholic superiors have taken no action, but a civil prosecutor is considering defamation charges. As for Father Rydzyk, he said that he “didn’t intend to offend anyone” but he refused to apologize to the president and his wife.

Rydzyk is a Polish Catholic priest of the Rome-based Redemptorist missionary order and the owner of a media empire that includes Radio Maryja station, the Trwam TV station, and the daily newspaper Nasz Dziennik. He is also the founder of the College of Media and Journalism in Torun.

Rydzyk has gained notoriety in the past for his allegedly anti-Semitic, xenophobic and nationalistic opinions. As a charismatic personality, he has become popular in extreme right-wing circles. His media outlets have given strong support to the Law and Justice party (PiS) led by Jaroslaw Kaczynski, the twin brother of President Lech Kaczynski.

The current uproar results from statements reportedly made at a lecture by Rydzyk at his journalism school. The lecture was given in the spring but a tape recording was only recently made public by Wprost magazine. During the lecture, Wprost reported, Rydzyk called President Kaczynski a “swindler” and accused him of bowing to pressure from the Jewish lobby.

In relation to First Lady Maria Kaczynski’s decision to sign an appeal opposing amendments to the Constitution regarding restricting abortion, Rydzyk called her “a witch” who “is talking about killing people, but she should start with herself.”

Some 700 Polish intellectuals, including former Prime Minister Tadeusz Mazowiecki and former Auschwitz inmate and Foreign Minister Wladyslaw Bartoszewski, signed an open letter condemning Rydzyk’s statements. They said that Rydzyk’s comments “revealed his contempt” for Jews and fellow Christians. “It hurts us that the contemptible and anti-Semitic remarks come from a representative of our church,” the letter said.

Father Zdzislaw Klafka, leader of the Polish Redemptorists, declined to punish Rydzyk for his statements. “He does not identify himself with the anti-Semitism that has been attributed to him,” Klafka said, and added that the priest was a victim of “serious provocation and media manipulation.” Klafka’s opinion was approved by Father Joseph Tobin of Rome, the worldwide head of the Redemptorist order.

The prosecutor in Torun is checking the credibility of the tape recordings of the lecture and expects to decide this month whether a defamation charge is warranted.