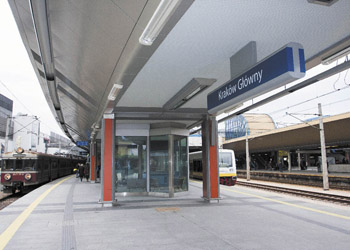 Work to revamp Krakow’s central railway station is expected to finish next spring – but passengers have had mixed experiences this autumn.

While the 130-million złoty programme is showing palpable signs of progress – work has been completed in some sections and a new platform opened – there are still snags that may become major difficulties if Polish railways see a repeat of last winter’s chaos.

Passengers heading for Krakow’s Balice Airport found that their journey from the city centre took three times as long as expected, when some Balice Express services were replaced by buses in early October. The replacement service, for maintenance, meant that some who had timed their journey to the airport to connect with an outgoing flight only just made the gate in time.

Buses departed from the station, still charging the standard price of 10 zł one way – but when the Krakow Post took the route there was scant information for passengers at the station, nothing available in English in advance and only an occasional staff presence to direct perplexed travellers who arrived on the platform unaware that their train had been cancelled.

Those travelling to other destinations in Poland also face continuing difficulty, with Krakow hit particularly hard. The newspaper Gazeta Wyborcza reports that 280 of 314 train services in and from Małopolska had new routes or timetables. Trains to Warsaw were taking half an hour longer, and there were delays on services to Zakopane and Oświęcim.

A spokesman for PKP in Małopolska said the new timetables had to take into account upgrade and renovation work on lines. And he warned that more disruption was to come. He added: “When planning timetables, we must take into account the schedules of works on different parts of the track. That is why the timetable will be changed often.”