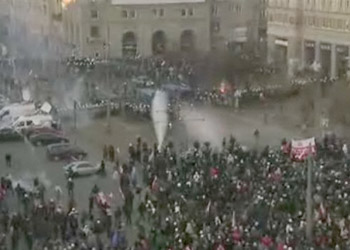 Riot police have used water cannon, tear gas and batons to break up pitched battles between groups of rival protesters.

The trouble began when protesters describing themselves as ‘antifascist’ attempted to block the route to be taken by the traditional Independence Day Parade at around 13:00 this afternoon.

Their intentions were known in advance and police were on the streets in force anticipating a violent reaction from nationalist groups who had pledged to ‘defend’ the march.

‘Antifascist’ and ‘anarchist’ groups managed to breach police lines and completely block ul. Marszałkowska prompting a change in the planned route of the march.

It is unclear where the violence began. Comments on social networking sites indicate that participants in the Independence Day march, who dress in military costumes from Polish history, were pelted with missiles at around 13:30.

By 15:00 a large number of protestors carrying Polish flags and chanting nationalist slogans had been penned in Plac Konstytucji by ranks of riot police.

Police used water cannon, tear gas and, according to some reports, rubber bullets in clashes with protestors in the square.

Police spokespersons have confirmed that officers have been injured, but have not provided details regarding numbers or severity.

Television cameras and footage shot by bystanders have shown several people bleeding from wounds and being taken away by ambulances.

November 11 is the date on which Poland regained independence in 1918 after 123 years of occupation by Russia, Austria and Prussia.

The day was marked, as usual, with ceremonies in Plac Marszałka Józefa Piłsudskiego attended by the Polish president, prime minister and other senior military and political figures.

One thought on “Independence Day Riots in Warsaw”