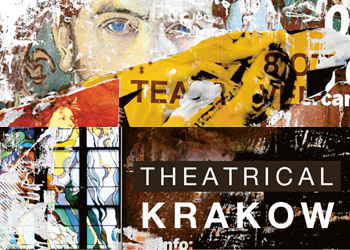 All of Krakow’s main theatres have something special on offer to welcome audiences back. Bagatella is launching its comedy season with performances in Polish of box office hits such as Paul Pörtner’s Shear Madness (Szalone Nożyczki), Pam Valentine’s The Spirit Level (Kochankowie nie z tej ziemi), Testosterone by Andrzej Saramonowicz and, definitely for adults only, Ray Cooney’s Mayday and Out of Order (Okno na Parlament) plus Woody Allen’s Midsummer Night’s Sex Comedy (Seks Nocy Letniej).

Meanwhile, over at the Słowacki Theatre, things are taking a more solemn turn with a musical interpretation of Nobel Prize winner Władysław Reymont’s novel Ziemia Obiecana (The Promised Land). This is the story of three men forced ever further from their natural human instincts in pursuit of the great capitalist dream. It is set against the background of a soulless, turn of the century industrial city where outward impressions and shallow pleasures count for everything, and pride and compassion for nought. The novel was famously filmed by Polish director Andrzej Wajda in 1975, and was nominated for an Oscar as best foreign language film. The Słowacki’s presentation opens on September 23, and runs on into October. Also look out for Czarnoksiężnik z krainy Oz (The Wizard of Oz) and Macbeth – both early highlights of Słowacki’s season.

Beautiful story-telling is the order of the day at the ever-quirky Teatr Groteska, with a new performance of American author Margery Williams’ Aksamitny Królik (The Velveteen Rabbit) which is guaranteed to delight young audiences. Sticking with much-loved favourites, Groteska also has Czerwony Kapturek (Little Red Riding Hood) and Brzydkie Kaczątko (The Ugly Duckling). Always careful to cater for families, Groteska’s programme includes showings in the mornings, afternoons and evenings, making it easy to fit performances around a hectic family life.

They might be short-run specialists, but that’s no reason to miss the new season at Narodowy Stary Teatr, which has paired Moliere and Nick Whitby in the opening fortnight. First up is Moliere’s Tartuffe (Sept 9, 10 and 11) – a comedy of family strife and very bad manners, which whipped up a storm of protest from the Catholic church when it was first performed in 1664. This is followed on September 14, 15 and 16 by Być albo nie być (To Be or Not To Be). Nick Whitby’s script – following a hapless Nazi
plot against resistance leaders – has split theatre-goers worldwide. You’ll either love it or hate it; indeed, one reviewer described a Broadway performance of the play as “overcooked theatrical pierogi,” but plenty of others disagree.

Scena STU has opted to open with the hilarious romp Kogut w Rosole (Cock Soup – September 16–18). Yes, it is pretty much as the English version of the name suggests – double entendre and a bunch of not particularly well-turned out men getting their kit off a-la The Full Monty. Also at STU in September is a chance to experience Polish cabaret through Grupy Rafała Kmity’s Wszyscyśmy z jednego szynela (September 24 and 25). It’s incredibly popular.

Right in the centre of Krakow, though surprisingly easy to miss, is an outpost of Nowa Huta-based Teatr Ludowy. Next time you’re in the main square looking up at the Ratusz tower, cast a glance towards ground level – the theatre is right there. The first of the season will be the evergreen comedy Wszystko o Kobietach (Everything About Women). Audiences keep on coming for this one, so it’s no surprise that Ludowy keeps putting it on. This season’s run begins on September 15 – expect the counterpart play Everything About Men later in the season.

For full programmes, check out the theatres’ own listings online – see below – or visit www.cracow-life.com to see what else is on offer in the city.

Where to catch a show