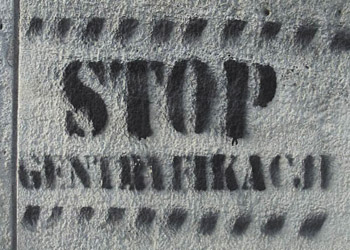 An ex-pat pensioner living in Krakow for 14 years has spent the past six months fighting to have his home’s electricity supply reconnected – but neither the owner nor the manager of the city centre building in which he lives have so far moved to help him.

John Hadman, 72, a UK national, lost the electricity supply to his home on January 27. He called in a private, qualified electrician but could not get permission from building owners Greg SP Zoo or management firm Lokia to have the work carried out. Mr Hadman enlisted the help of Krakow’s consumer protection federation (Federacja Konsumentów Oddział w Krakowie), and eventually took his case to the public prosecutor – although the prosecutor’s office formally rejected the case in early April.

Just two weeks later, on April 22, Mr Hadman’s water supply was cut off. He has lived since then with no electricity or water, and has so far received no help with either from Lokia or Greg. FKOK have continued to push for re-connection – and the Krakow Post has seen documentation proving that Mr Hadman is not behind with payments – but have so far been unsuccessful.

Mr Hadman faces a further wrangle over the use of a balcony associated with his apartment. His contract shows that he is entitled to the space – but he says that a second contract has been issued giving a restaurant equal use. As a result, Mr Hadman said, he now has diners eating and drinking directly outside his windows.

Polish and European law give tenants rights to reliable and uninterrupted power and water supplies in their homes, and the right to live without unnecessary interference or intrusion. However, neither Greg nor Lokia have claimed responsibility for the supplies to Mr Hadman’s apartment. An agreement has not yet been reached regarding the use of the balcony.

Despite support from the consumer protection federation, and unofficial assistance from lawyer friends, Mr Hadman said he has so far been unable to force the hands of either Greg or Lokia. Neither company provided comment to the Krakow Post, but Mr Hadman said he believed it was not in the companies’ interests to improve his living conditions.

He said: “They want me out. It’s an important building, in a part of the city where property is very valuable.” He asked that the address of his apartment was not published, but agreed that the Krakow Post could identify it as an Old Town property, within the Planty ring.

The Krakow Post is unaware of any plans for the sale, redevelopment or re-letting of Mr Hadman’s apartment building. However, tenants in other parts of Krakow, notably up and coming districts such as Kazimierz and Podgórze, have faced reluctance from landlords and property managers as the increasing desirability of these areas has pushed up demand and value.

It’s nothing new, and many Poles who are sharing small apartments, living with families, or moving to other cities see the problem as one that has come with the influx of Western money – which can buy prime properties – since Poland’s entry to the European Union. This process, of pushing established but lower income tenants from their homes to make way for new money, has a name in English: Gentrification. In Polish, it’s known as ‘reaching for European standards’. Clearly this is a step beyond what is happening to Mr Hadman; he is, after all, the ‘new money’ – despite being a tenant rather than property owner.

Nevertheless, he is convinced that there are serious human rights issues being breached with his case, not least because he has been deprived of basic supplies for more than six months. Now he wants Brussels and London to lend their support in forcing, at the very least, reconnection of his water and electricity.