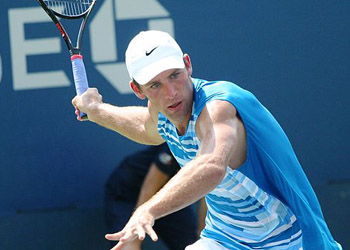 Poles didn’t steal the show at the 125th edition of the Wimbledon Championships, but their exploits made a lot of the tennis world take notice. Krakow native Agnieszka Radwańska entered the tournament as the 13th-seeded player in ladies’ singles, but her journey was short-lived as she was shockingly dismissed in round two. But Polish television sets were still tuned in during the second week of the fortnight as previously-unheralded Łukasz Kubot advanced to the last sixteen of the men’s competition.

Kubot, who had previously made his mark as a doubles player, had to qualify in order to join the Wimbledon field. The Lubin resident brought a world ranking of 93 in only his second career appearance at the tournament.

In the opening match Kubot earned a five-set win over Frenchman Arnaud Clément, a wild card entrant, in a match that lasted nearly three and a half hours. He followed that performance by defeating Croatia’s Ivo Karlović in straight sets. Kubot met Gaël Monfils in Round 3, the 9th-seeded player in the draw. In what will undoubtedly go down as one of his career highlights, Kubot stunned the Frenchman 6–3, 3–6, 6–3,6–3. By advancing to the 4th round, the Pole equaled his best performance in a Grand Slam Tournament, having reached the same stage at last year’s Australian Open. With one more win, Kubot would have become the first qualifier in eleven years to reach the quarterfinals.

Then the magic turned to misery in the round of sixteen as he fell to Spaniard Feliciano López in an agonising five-set match. Kubot had two chances to close out the match in the third frame, but the 44th-ranked López rallied all the way back to win 6–3, 7–6(7–5), 6–7(7–9), 5–7, 5–7. A dejected Kubot said afterward: “I have only myself to blame. I have to learn as much as possible from this defeat and move on.”

By contrast, Agnieszka Radwańska had a Wimbledon to forget, this being her earliest exit in six career entries into the singles tournament at the All England Club. The star of Polish tennis began impressively, winning all nine games against Belorussian Olga Govortsova, who retired in the middle of the second set due to an unspecified muscle problem.

But Radwańska then ran into determined Czech Petra Cetkovská, who came in ranked 81st in the world. The Pole took the first set but ultimately lost 6–3, 6–7(5–7), 4–6. She was clearly out of her element, at times throwing her racket in frustration. Following her defeat, Radwańska commented: “I just collapsed in this match. I don’t know what happened.”

Agnieszka and her younger sister Urszula, who is also seen as a great hope for Polish womens’ tennis, signed with agency Lagardère Unlimited back in February, the same agency that represents Karolina Woźniacka, the Danish star who also has close ties to Poland, and is currently ranked No. 1 by the WTA.