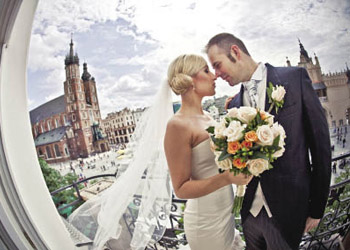 Nowhere does weddings quite like Poland. Polish weddings are legendary for their sheer exuberance, scale and longevity. Traditional Polish weddings lasting two days, or more, and featuring crates of vodka and meals with a dozen courses are
still common.

With links between Poland and the other states of the EU becoming ever closer, romantic attachments between Poles and non-Poles are also becoming more common. Poland is now a popular choice of venue when these attachments lead to the altar. The Krakow Post spoke to Bożena Sobczak of Wedding-in-Poland.com, a Krakow company that specialises in organising weddings for foreign or mixed-nationality couples, to find out more.

“Family, atmosphere and cost are the three reasons couples decide to get married in Poland,” said Bożena. “In the majority of cases, it is the bride who is Polish in mixed-nationality couples, and being with their family is very important to them on their wedding day. Cost is also a big factor. It is much cheaper to have a lavish wedding in Poland than it is in the UK or Ireland.”

Bożena became involved in the wedding-planning business in 2006 when friends asked her to lend her expertise in event organisation to their own nuptials. “I had been organising corporate events for some time when I became involved in wedding planning. Weddings are much more fun!” she said.

Business is booming for Wedding-in-Poland.com. “We have weddings almost every weekend during the season,” said Bożena (that’s from June to the end of September, for the uninitiated). “We even organise weddings out of the traditional Polish season, at Christmas and Easter for example.” “Most of the weddings we organise are for mixed-nationality couples, where one is Polish, but Poland is also becoming a popular place for foreign couples to get married. Górale-themed weddings are particularly popular,” she added.

Wedding-in-Poland.com deals with every aspect of wedding planning. Bożena’s firm and its network of local contacts can guide you through every step or, if you prefer, just handle one or two things and leave the rest up to you. The company even arranges appropriately romantic occasions for the proposal.

“We once arranged for a young lady to visit a fortune teller, who had been primed to tell her there was great happiness in her future. Then there was a romantic dinner, and the question was popped.” “We’ve also arranged engagement scenarios in Krakow’s balloon and in the depths of the Wieliczka Salt Mine. We haven’t had a refusal yet!” Bożena noted.

What is the most difficult part of arranging a wedding in Poland? “Booking a venue is usually the critical task,” said Bożena. “The best venues are very popular, and you might need to book some of them two years in advance,” she warned. “The earlier you plan the better, but the absolute minimum is one month – that’s how long it takes to get the paperwork done.”

Some couples choose to have a simple civil ceremony where they live, and then come to Poland for the full pomp of a wedding service in one of Krakow’s fabulous churches. “Of course we also arrange church weddings under the concordat between the Polish state and the Catholic church, which are fully recognised in law,” Bożena said. “Basically, whatever you want, we can help you achieve it!” Find out lots more at: www.wedding-in-poland.com

One thought on “Weddings: Polish Style”