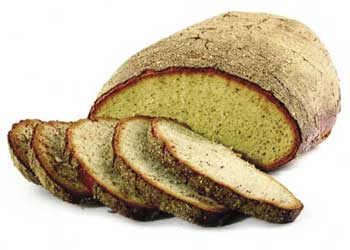 I’m breaking a rule here and revisiting a subject from the not too distant past: bread. In early March it was announced that Prądnicki bread from Krakow had been awarded Protected Geographical Indication (PGI) status by the European Union. It sounds like good news, doesn’t it? But in many ways, the hard work for the producers, who have been waiting for this news for three years, starts now.

A quick recap: back in the 15th century Prądnicki bread was made by the bakers of the Prądnik district in Krakow for the local clergy, who loved its chewy rye taste, springy texture and long lasting freshness. These huge, almost 5kg loaves (it seems that there were large numbers of priests in those days and they were pretty hungry) could be found at the Stary Kleparz market up until the late 1920s.

A few years ago Antoni Madej, a local Krakow baker, decided to recreate Prądnicki bread after he saw it mentioned in an old poem. It took him many months of experimentating but once he was happy with it, he applied for it to be registered as a regional specialty. After all, it would be in good company; Oscypek, Lisiecka sausage and Krakow’s Obwarzanki have this status already. This March, after a wait of just under three years, his plan finally came together. Now, anyone who wants to make Prądnicki bread, and label it as such, has to make it within Krakow’s city boundaries and according to the regulations.

The idea behind the whole PDO/PGI system is to provide shoppers with a guarantee that a product has been made to a certain level of quality and in accordance with tradition. For small producers, it helps them to distinguish their products in a very crowded food market by virtue of the round, yellow and blue logo on their packaging.

The main challenge facing these producers now is marketing. Not only are few people aware of what this logo means (that a product has been made according to traditional techniques, using traditional ingredients in a specific place) but in a cost conscious country like Poland, persuading customers that it is worth paying more for it is also a challenge.

It is not all doom and gloom though. Many products, Parmiggiano-Reggiano for example, have very strong awareness among consumers and a committed group of producers standing behind them to repel counterfeiters and tirelessly educate their customers about why this product is so special.

Other products do not have it so easy. Vodka is now so widely produced all over the world, that there is no chance for the traditional vodka-belt countries of Poland, Finland, Latvia, Estonia, Lithuania, Denmark and Sweden to create an ‘official’ recipe – one based on potatoes and grain, which is what they tried to do in 2008. The attempt was voted down by the European Parliament and now vodka can be made from sugar beet, citrus fruit or even grapes.

As shoppers become more aware of the problems of a food system where the origins of what they eat aren’t made clear, a regional identity can also help reassure shoppers who are concerned about food scares. The 2001 foot and mouth disease epidemic in the UK was partially caused by the distances travelled by animals. English lambs would be transported for a night to Wales so that they could be sold as Welsh lamb. Now this is impossible – Welsh lamb has a PGI and can’t be confused with anything else. When I look at the anonymous slabs of beef and pork in Krakow’s meat shops and I consider the volume of meat that we eat here, I can’t help wondering whether this would be a really good idea.