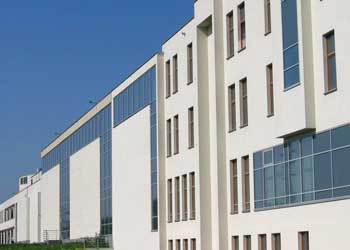 Where not so long ago there was only wasteland, the Jagiellonian University is building a state-of-the-art campus. Over the past decade a horde of startlingly modern glass and steel buildings have mushroomed alongside the rapidly growing suburb of Ruczaj. Their appearance is the culmination of a dream that has been 600 years in the making.

Lying on her deathbed in the late 1300s, Queen Jadwiga of Poland’s royal Jagiellonian dynasty donated her jewels and costly robes to the development of the Krakow Academy, as the Jagiellonian University was then named. The aim was to keep the most talented Polish and Central European students close to Krakow, then the heart of Poland, and to prevent them drifting away to the courts of Italy or France. Thanks to Jadwiga’s substantial bequest the deteriorating Academy was restored and modernised to compete with major academic centres in Prague, Bologna and Padua.

Since that time, the Jagiellonian University has thrived, but has remained constricted in dozens of ageing building scattered throughout the city. The bold initiative to create a fully-fledged modern university campus was named the 600th Anniversary of the Jagiellonian University Revival. Prof. Władysław Grodziński, spiritual father of the campus plan, started popularising the idea among his colleagues in the 1970s and also drew up the first tentative plans. The university’s new heart was to be located in the Pychowice area of Krakow, but for economical and political reasons the first lot was not purchased until 1994.

Now, in 2011, the campus includes several high-capacity, state-of-the-art buildings housing several faculties, departments and institutes. Buildings and facilities operational so far include the Faculty of Mathematics and Computer Science, the Faculty of Management and Communication, the Jagiellonian Centre for Innovation’s LifeScience Park and the library of the Natural Sciences Research Centre. Facilities are also planned for the departments of Physics, Astronomy and Applied Computer Science, Chemistry, and Zoology, among others.

It is estimated that the educational capacity of the university will double, so there are also plans for the campus development to include new dormitories capable of housing 4,500 students. Currently only 40% of out-of-town students can be placed in dormitories – the rest have to find often expensive rented accommodation. “We do not want studying at the Jagiellonian to be a luxury – one of our strategic goals is the creation of equal opportunities for everyone,” said Jagiellonian authorities.

Unfortunately, the rapid growth of the campus has not been matched by developments in local infrastructure. One result is severe overcrowding on all bus lines to the area. “I was stunned when I first saw those fine buildings, but even during the first week I realized that to get there would be a real challenge. When over a hundred people want to make it to a lecture, one bus is not enough to hold them and some get left behind. When lectures start in the morning and end in the afternoon, we get hundreds of people heading in the same direction back and forth,” said Karolina, a first year student of social communication. To solve the problem of transportation in this area the city has recently begun building a long-awaited fast tram line, but the first trams are not expected to run on it for another two years.