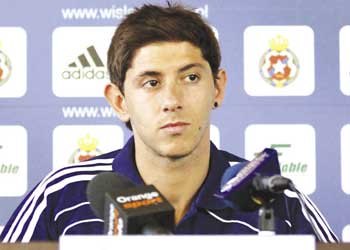 Polish fans are complaining that they are finding it difficult to identify with their own clubs, as less expensive and more highly skilled players from abroad are brought in to reinforce their sides, and top Polish footballers emigrate to richer leagues. Only a few years ago, the names on the jerseys of Polish teams bristled with reassuring Polish consonant combinations, while today’s clubs are more likely to be headlined by imported players.

The flock of transfers to Polish clubs from other countries has also brought mixed results, Lechia Gdańsk’s hopes in Croatian defensive mid-fielder Boris Radovanović, for example, appear to have been overly optimistic. Cracovia’s two foreign strikers, Burundian Saidi Nitbazonkiza and Moldovan Alexandr Suvorov, managed only a meagre three goals between them in the fall round, while showing promise of redeeming themselves in the first spring match against Legia Warszawa with one each. Suvorov’s only goal in the league was from a penalty shot.

Wisła, on the other hand, has been a leader in international transfers in the Polish league, packing its own Polish players off to Turkey. Its squad already boasts 15 foreign nationals, with Serbian, Slovenian, Dutch and Estonian players now wearing the white star. But it was Wisła’s move to sign Israeli national Moar Melikson that provoked heated discussion in the Polish press and an instant storm of condemnation in the Israeli media because the songs and slogans habitually chanted by the club’s supporters often sound like anti-semitic slurs — their hated rivals Cracovia are known unofficially as the “Jews,” for historical reasons.

Melikson, a Polish citizen whose mother emigrated to Israel as a child, dismissed the notion that he had concerns about anti-semitism in the organization or the country by calling it: “B——t.” The offensive mid-fielder’s resilience and imagination made a powerful impression in his debut against Arka Gdynia, drawing nearly universal praise in Polish football circles.