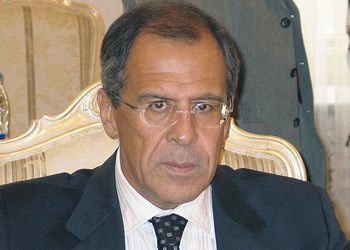 Russia’s Foreign Affairs Minister Sergey Lavrov is in Warsaw for the third time this year. His main aim is to prepare for the visit of Russian President Medvedev on 6 December this year. His agenda is packed full with discussions on a variety of topics and a meeting with President Bronisław Komorowski and Speaker of the Senate Bogdan Borusewicz.

His first agenda item will be to rendezvous with the Polish-Russian Committee for Strategic Cooperation. A Polish diplomat told Gazeta Wyborcza that the Committee seeks approval for open air space above Siberia for Polish planes flying to the Far East, an increase in shipments to Kaliningrad through the port in Gdynia, to initiate a limited no-visa travel zone between the Russian enclave and two bordering Polish voivodships, to expand an existing but meagre student exchange program between the two countries, and to create a Polish-Russian Centre for Dialog and Understanding (which is ready to start functioning as an institution on the Polish side).

Lavrov will then meet with Minister of Foreign Affairs Radosław Sikorski to discuss historic issues. Topping that list, as anyone might have guessed, is the disclosure of all the materials related to the Russian investigation into the Katyń massacre by NKVD officers. The Polish side hopes to accomplish this during or prior to Medvedev’s visit in December. Poland also hopes to discuss the exchange of post-Soviet property between the two countries. Wrapping up the talks is a discussion of Russia’s opinion on NATO’s current strategy, or more specifically, its aims to constructively engage Russia while alleviating growing concerns of certain Baltic members.

The three cornerstones of Russia’s presidential visit include historic, economic, and political aims. As mentioned previously, Poland will ask for the remaining 96 of 183 Katyń documents to be released, in order to close the case on the investigation and rehabilitation of Polish officers killed there. These include some of the most important documents explaining why the Russian investigation suddenly came to a halt six years ago, which remain classified. The economic leg of the agenda will follow up on a Polish-Russian business forum set to take place before 6 December.

Some might say the most ambitious goal of the meeting rests in the political sphere. The Polish-Russian Forum of Experts, including social activists, artists, and intellectuals, has established itself as an active force in both countries over the last few years. Poland will now try to convince Russia that the Polish-Russian Forum should join forces with the Russian-German Petersburg Dialog (a forum of Berlin and Moscow elites), changing both from two-way to trilateral assemblies.

To add to the excitement, there are rumors that Vladimir Putin is to arrive in Warsaw today, most probably to attend negotiations and the signing of a gas agreement between Poland and Russia. However, official sources on either side have not confirmed this rumor. Instead, Gazeta Wyborcza was told by the head of the Russian Press Offices that Putin is in Samara today, but his closest associate, Igor Sechin, is scheduled to arrive in Warsaw on Friday.