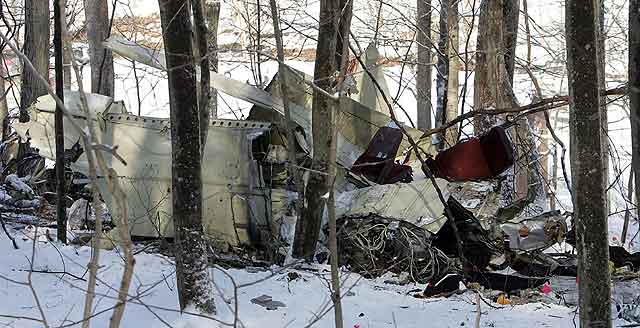 Wednesday in Moscow another set of documents to be used in the investigation of the Smolensk tragedy exchanged hands. The Interstate Aviation Committee (IAC) deputy chairman, Oleg Yermolov, said that the nine boxes being handed to Edmund Klich, the Polish representative to the IAC, contained 251 items and over 10,000 pages of manuals, design documents, and reference materials found at the scene of the crash as well as the analysis results of the fuel and lubricating materials that were used in the plane.

One of the boxes was not sealed in order to show journalists the state of its contents, which according to Yermolov, was considered in “good condition”. The Polska Times said Polish journalists who attended the press conference described how the room filled with the smell of jet fuel upon opening the box, despite the fact that the crash happened over four months ago. Yermolov remarked that the specialists examining the evidence had to take frequent breaks during the investigation because of the intensity of the smell.

It is not believed that any groundbreaking evidence has been included in this set of documents. The service book for the Tu-154 plane, which will allow investigators to establish the state of the aircraft both before and at the time of its last flight, is still being examined in Moscow. It includes a record of all maintenance requests followed by the details of any repairs made, which is why secretary of the National Aviation Council, Tomasz Hypki, claims it is the most crucial document to the investigation.

Klich has also asked for and not yet received a report on the Smolensk North Airbase and the performance of its technical equipment on test flights conducted at the base after the accident, as well as transcripts from the air traffic control towers on the day of the crash.

While some have criticised the Russians for various reasons, from delaying the Polish investigation to conspiratorial claims of causing the crash, Health Minister Ewa Kopacz, who was in charge of identifying the victims and working with their families in Moscow, sheds another light on the Russian investigative team. In an interview with Gazeta Wyborcza yesterday, she praises the hospitality and professionalism with which the Russians greeted her, the Polish medical staff, and the victims’ families during the gruelling and emotional process of identifying the crash victims’ remains. She says they went above and beyond her expectations of dealing with such a difficult situation, taking the time to pay special heed to the emotional state of family members involved in the identification process.

The situation was at times so emotionally straining, she says, that two of the psychologists sent to help the families broke down during the process and had to return to Poland. She praises not only the help of the medical staff, specialists, and government representatives, but also the general reception she and families received in Moscow, including the exceptional hotel service, specially arranged transit through the city, and the fact that all of it was provided free of charge.