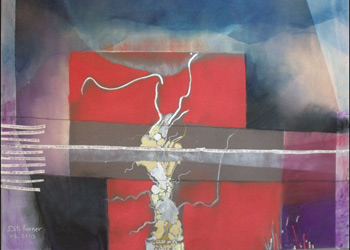 There’s no doubt that Polish landscapes have become more and more familiar to Jerusalem-born artist Diti Ravner. “I have been living in Warsaw since April 2009. My current paintings are influenced by those beautiful views of this country and of its sad memory,” she says.

“The Colour of Yiddish” is the title chosen for Ravner’s first solo show in Krakow, organised by the Galicia Jewish Museum. After exhibiting last October in Lublin at the Michałowski Gallery, the Israeli artist debuted in Kazimierz at the end of June as part of the latest Jewish Culture Festival.

Her paintings are an interesting complement to the permanent exhibition “Traces of Memory”, which comprises 150 pieces chronicling the Jewish past of Poland as seen by the late British photographer Chris Schwarz, who opened the Galicia Jewish Museum in an old furniture factory almost six years ago.

The contrast between Ravner’s dreamy and subtle-coloured landscapes and Schwarz’s realistic snaps, displaying the ruins of countryside synagogues and the remains of the Bełżec concentration camp, is evident to the visitor.

Her paintings seem to convey the artist’s need to reconstruct the memories of her Jewish heritage through the means of imagination and reverie. The figurative elements, such as the free-floating doors of Yiddish Story and the large-scale bird featured in Dove Behind, play just a minor role in the aforementioned abstract and fuzzy compositions.

Ravner uses pastel colours to grasp the subjective reality of a past only experienced through the memories of her Jewish parents, who lived in Polish-administrated Lwów (now Lviv in Ukraine) before the Second World War. In doing so, the Israeli artist seems to be aware that her memories will never have the clear evidence of the photographic medium.

Apart from being an homage to Jewish culture, the Yiddish words overlapping the paintings work as anchors to reality, tempering the elusive patterns of the landscapes. The fact that her paper-cut Yiddish fragments are always glued in a readable position only confirm that Ravner does not employ collage just for decorative purposes.

Each of the 23 works by Rivi Ravner on display at the Galicia Jewish Museum until the end of August are for sale at very reasonable prices. Just ask the ticket office for further information about their availability.