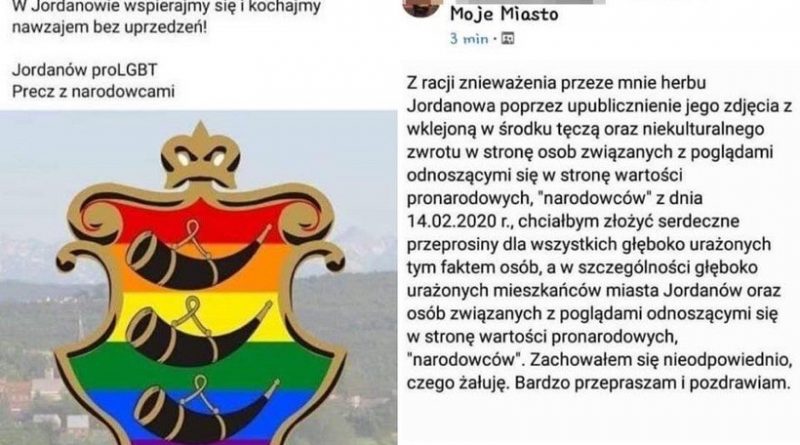 A 16-year-old in the small Lesser Poland city of Jordanów was reported to police by their mayor after posting an image of the city’s coat of arms with rainbow colors on Facebook.

The teenager, Jan, posted the above picture in a private local Facebook group on Valentine’s Day, writing (in Polish) “Let’s support and love each other each other without prejudice!” along with “proLGBT Jordanów” and “down with nationalists.” The post was quickly removed by the page admins.

The next day, local police were notified by Jordanów mayor Andrzej Malczewski, age 56. They visited Jan’s home and questioned him in the presence of his mother, warning him that he had broken the law and could face serious consequences.

The law to which they referred is art. 137 of the Criminal Code, which says: “Whoever publicly insults, destroys, damages or removes an emblem, banner, banner, flag, flag or other state mark, shall be subject to a fine, the penalty of restriction of liberty or imprisonment for a year.”

Jan told Polish the police intimidated him by telling him he could be sent to juvenile reform and ruin his future. The police denied that they threatened him.

Later, Jan made another post (also seen above) apologizing for posting the image, particularly to the city and to nationalists.

There is some possibility that Jan might still face legal consequences, though they will be under juvenile law. In that case, leftist politicians as well as NGOs supporting LGBT rights have said they will support him.

There is a complex and inconsistent history of gay rights in Poland, where, exceptionally, homosexuality has never been criminalized. Now Poland joins Bulgaria, Latvia, Lithuania, Romania, and Slovakia in prohibiting gay marriage. The 22 other EU member states recognize gay marriage and/or civil partnerships between same-sex couples.