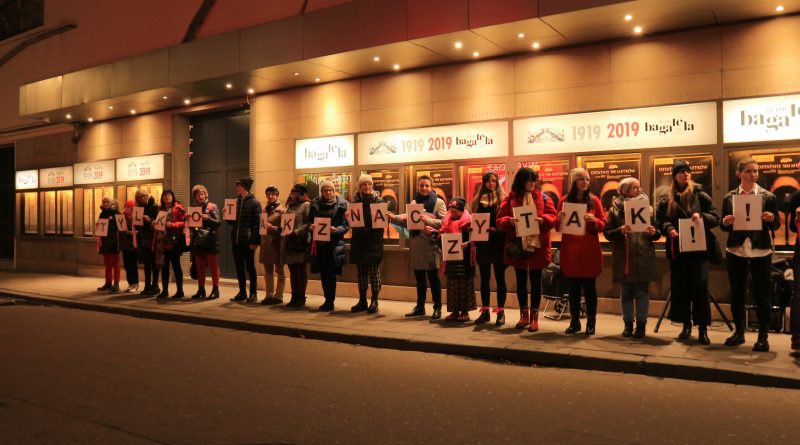 Over 30 activists gathered in front of Krakow’s Bagatela Theater this evening to dance to feminist anthems for “V Day,” an event to raise awareness of rape and sexual violence against women.

Sister groups joined them around the world as part of the global One Billion Rising Movement, founded in 2012 by Eve Ensler (most famous for penning the play The Vagina Monologues). Now it includes cities in over 200 countries around the world, among them over two dozen Polish cities.

Krakow’s edition was started in 2013 by Fundacja Machina Fotografia, an NGO which organizes social initiatives with a focus on empowering women and people with disabilities.

This year’s slogan was “TYLKO TAK ZNACZY TAK!!!” (“ONLY YES MEANS YES!!!”). The phrase and location were especially significant in Krakow in the wake of a scandal there late last year. Henryk Jacek S., who managed the Bagatela Theater, was accused by a group of women (including actresses) of sexual assault and mobbing. He was fired and, if convicted of his charges, faces up to three years in prison.

Along with drawing attention to this issue and to assault in general, this year the Polish activists were also advocating to expand the definition of rape in Polish law to include sex without explicit consent, as recommended by the European Institute for Gender Equality.

Weronika Śmigielska contributed to this article.