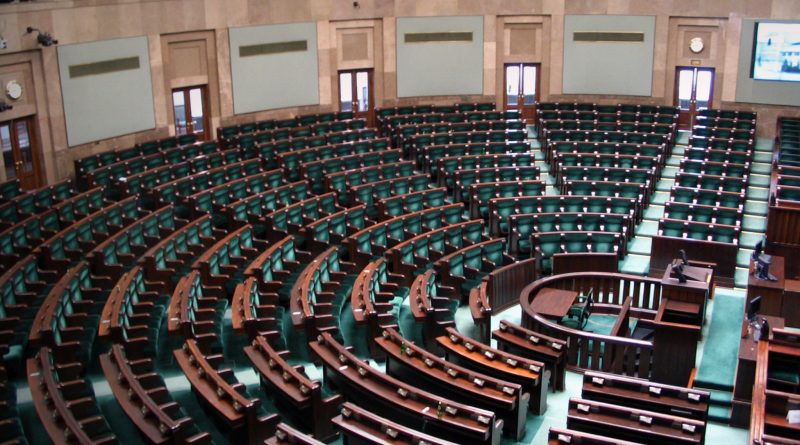 Tomorrow, Poles go to the polls to vote on the next parliament. How does it work, and what should we look for?

The Polish parliament: A quick look

The Polish parliament is composed of a 100-member upper house, the Senate, and a 460-member lower house, the Sejm. Members are elected every four years under a system of proportional representation – in other words, if a party gets 15% of the votes, they will be allocated approximately 15% of the seats (with a minimum 5% threshold for individual political parties and 8% for coalitions). The primary duty of the Sejm is to pass bills which are then accepted or rejected by the Senate (though the Sejm may override the Senate with enough votes). After passage, the bill is sent to the president –currently Andrzej Duda, supported by the Law and Justice (PiS) party – for signature or veto.

In the last election in 2015, a coalition between the Civic Platform (PO) and Polish People’s Party (PSL) suffered a major defeat, being replaced by a majority PiS government which has ruled since then – the first time since the communist era that a Polish political party has been able to rule without a coalition. In tomorrow’s election, PiS will try to defend or increase their gains (which current polls signal is likely), while the opposition parties have reorganized somewhat in a bid to defeat PiS.

How does voting work?

Polish citizens 18 or older can vote. You can find your polling place using the official search engine here. Voting is open from 7 am to 9 pm.

What are the major political parties?

PiS is a socially conservative nationalist part which currently enjoys a 51% majority in parliament. It was founded by twin brothers Lech and Jarosław Kaczyński; the former was killed in the 2010 Smolensk airplane disaster, and the latter remains the de facto party leader, despite the fact that officially he is a normal member of the Sejm.

The ruling party remains popular with many Poles and is polling well. The Polish economy has continued to grow under their tenure, and they have introduced welfare programs to give more money to parents, farmers, and pensioners. They have phased in a trading ban on Sundays and promised to double the minimum wage if they stay in power.

However, some of their other actions have been extremely controversial, such as consolidating their power over the judicial system (and forcing a constitutional crisis), attempting to completely ban abortion, cracking down on the independent press and putting state media under closer control, reneging on an agreement to accept Middle Eastern refugees into Poland, and permitting logging in the primeval Białowieża Forest.

KO is a big tent alliance of parties chiefly led by Civic Platform (PO), PiS’ strongest rival for the previous few election cycles. PO dominated the legislature from 2007-2015 under the leadership of Donald Tusk, now the European Council president. KO also includes Modern, the Greens, and a few smaller parties.

KO is more pro-EU than PiS, which has had a tense relationship with Brussels over policy disagreements. In the past, PO has supported a more decentralized government and greater economic liberalization compared to PiS, and they agreed to accept 5,000 Middle Eastern refugees as part of a deal with the EU.

Yet PO supports many of the same conservative social policies as PiS, to the point where critics of PO have accused them of being largely intellectually bankrupt beyond “not being PiS.” PO also had its share of legal and ethical scandals during its era of power (though none attracted as much international criticism as PiS’).

Left is chiefly a coalition between three parties:

None of these parties currently have representation in parliament, and voters who are frustrated with Poland’s ultra-conservative status quo and the government’s cozy relationship with the Catholic Church may turn Left. Yet many Poles still associate them with the largely negative legacy of the communist People’s Republic of Poland, so they remain skeptical.

Perhaps an odd alliance, as its chief members are the Polish People’s Party, an agrarian Christian democratic party which once ruled in a coalition with PO, and Kukiz’15, an unofficial club of anti-establishment politicians led by former punk rocker Paweł Kukiz which has supported PiS and far-right nationalist movements in the past. Now with 38 members collectively in the Sejm, they promise to represent centrist, pro-European policies and not to form a coalition with PiS (though some analysts are skeptical).

A coalition of parties which manages to be so far-right, ultranationalistic, and euroskeptic that PiS leader Jarosław Kaczyński has called an alliance with them out of the question. Its most visible figure is Janusz Korwin-Mikke, who has drawn widespread criticism for his myriad sexist, racist, and ableist statements, yet retains a small, dedicated fan base of hardcore libertarians or fans of his eccentric public style.

PiS is currently polling very well and seems likely to retain power. What could endanger them would be a higher voter turnout rate (it was only 51% in the last election) or a coalition between opponents who manage to collectively gain over 50% of seats in the Parliament.

Results from exit polls are expected tomorrow evening after the polls close.

One thought on “2019 election for Poland’s parliament: What you need to know”