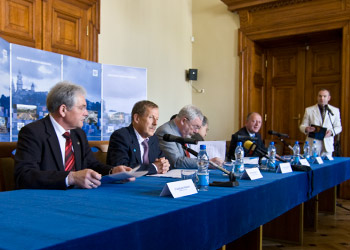 Ten years ago in Warsaw, a ministerial conference gave birth to the intergovernmental organisation Community of Democracies. Specifically, the “Warsaw Declaration”, signed on 27 June 2000, created the organisation and declared that the signing governments would “respect and uphold… core democratic principles and practices”. The conference was spearheaded by then Polish Foreign Minister Bronisław Geremek and U.S. Secretary of State Madeleine Albright.

This year marks the 10th anniversary of the organisation’s creation, so it’s just as appropriate that the conference will return to Poland, this time to Krakow. On 2-4 July 2010, the city will host foreign ministers from around the world for the High Level Democracy Meeting.

In addition to the ministers of foreign affairs from participating countries, participants include over 200 democracy and human rights advocated and activists, youth delegates, and former heads of state as special guests.

The three-day meeting will include panels in three main themes: Women for Democracy, End of the End of History: Does Economic Efficiency Trump Democracy?, Activists for Democracy, and New Technologies for Democracy. In addition, the Prof. Bronisław Geremek Award will be granted to one democracy advocate.

Speaking about the meeting at today’s press conference, Morton Halperin of the Open Society Institute stated: “This will be a key moment in which democracy activists from around the world come to Poland to show their commitment to democracy”.