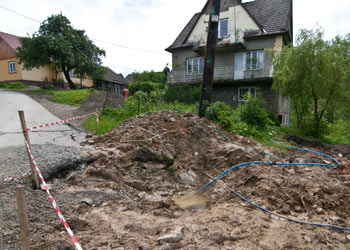 The month of May brought the worst flooding southern Poland had seen since 1997, and while Krakow and surrounding areas were affected by the high level of the Wisła, one small town was hit by a far worse disaster: landslides.

Lanckorona, with a population of about 2,100 people, lies an hour’s drive southwest of Krakow. On the night of 18 May, after several days of heavy rain compounded by a particularly wet winter, the over-saturated ground beneath parts of the village began to move. The water had sunk beneath the top layer of soil, causing the upper part to slide down as if it were a layer of gelatin.

What makes landslides far more devastating than flooding, according to Lanckorona Mayor Zofia Oszacka, is that after a flood, the water eventually goes away. The objects in a home may be damaged and carpets will need replacing, but the basic structure of the house remains intact. Landslides, on the other hand, damage the very foundations of the affected buildings, leaving them unable to be repaired. Houses are cracked right down the middle as part of the land beneath them shifts. Even worse, the ground beneath the houses is no longer suitable for future development, meaning that the property owned by affected residents is now worthless.

In Lanckorona alone, 140 people have been evacuated from their homes, and between 60-100 houses have been declared uninhabitable by inspectors due to the landslides. At the moment, some residents who lost their homes have moved into temporary housing set up by the county, but most are staying with family.

When the landslides began, 105 professional and volunteer firefighters, led by Lieutenant Brigadier Paweł Kwarciak, commander of the Wadowice Country Fire Department, helped in the rescue immediately following the landslides. Together with geologists from the National Geological Institute, they devised a completely new method of curbing further landslides by building a series of ditches to drain the underground water. Between 18-23 May, they worked dawn to dusk to prevent further landslides from damming the river, which would have severely increased the amount of property damage and possibly led to fatalities. Significantly, there has been no loss of life in Lanckorona as a result of the landslides.

During the calamity in May, Mayor Oszacka organised community meetings every evening, during which the fire fighters explained the work they were doing to stem the landslides, while the mayor explained what the local and national government was doing to help affected residents. According to Mayor Oszacka, “The worst disaster is not knowing what will happen,” and the meetings were to serve to reassure those affected that they are not alone in this disaster.

The mayor has called what happened in Lanckorona a “quiet tragedy”; the process of landslides is slow and quiet compared to a sudden flood of water or a severe storm, but the damage is just as real. At the time of the landslides, the residents of Lanckorona received aid in the form of fresh drinking water, food, and a medical centre set up by the charity Caritas. The area was also visited by Prime Minister Donald Tusk and Cardinal Stanisław Dziwisz. However, much more help is needed. Mayor Oszacka’s plan to rebuild the community carries a hefty price tag of between 30 and 40 million złoty, which will provide not only new housing for affected residents in the form of new condominiums, but the restructuring of the affected land, so no “ghost villages” remain. So far, about 150,000 złoty has been raised.

The Krakow Post has teamed up with the Polish Radio External Service in their drive to help the residents of Lanckorona raise funds for new homes. Please visit their Lanckorona aid page for information on how to donate.

Below: Photos from affected areas of Lanckorona.