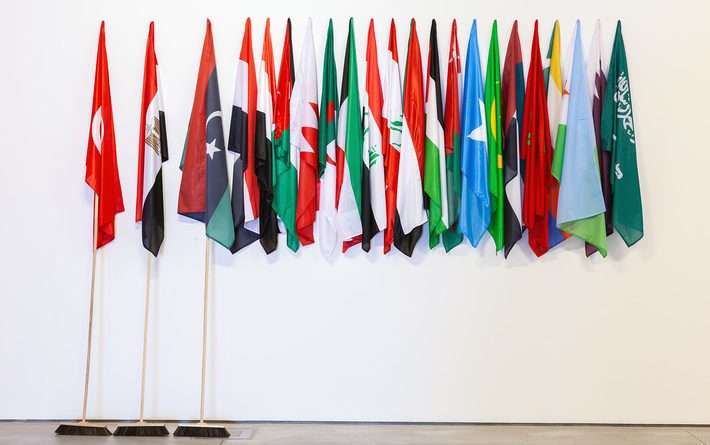 They say all art is political, and MOCAK’s current exhibition, Motherland in Art, is no exception.

The idea of a ‘motherland’, or homeland, has been undergoing a great (and at times painful) modernization. Conventionally, a motherland was where one grew up; felt a sense of belonging and willingness to defend, even at the cost of human life. It is the place, or places, to which we trace our ancestors, culture, and sense of self.

Today, as society becomes entangled in ever-increasing religious, ethnic, and political discrimination, the concept of a motherland becomes sticky. It is these thorny connotations that are key to MOCAK’s exhibition.

Motherland in Art attempts to answer the question of what motherland means to us, and it is worthwhile to evaluate the diverse answers presented by the artists. The exhibit touches on connotations of nationalism, globalization, and immigration—just to name a few ideas. Even the title of the exhibition, Motherland in Art, represents a political decision. If the translation from Polish were rendered faithfully, the title would be Fatherland in Art (Ojczyzna w Sztuce). However, gender roles, patriarchy, and the historical context of ‘fatherland’ make such an English title unfit.

While not all of the works are specific to Poland, the nuances of Polish identity are heavy throughout MOCAK. Much of the artwork serves as a commentary on how Poles straddle the line between criticism and patriotism given Poland’s current political climate and complex history. The exhibition explores notions of Polish-ness, presenting Polish nationalism as a source of unification and also a danger to the future of the country. It also reflects on the 100th anniversary of the end of Polish partition in 1918.

Motherland in Art features works exploring the interpretation of motherland from all corners of the world—including the works of American, European, and Middle Eastern artists. It offers thoughtful perspectives on how we can still embrace the concept of a motherland in today’s globalized atmosphere. MOCAK’s exhibit also forces us to ask what our obligations to others are based on our humanity, not simply on the country of which we are citizens. Works in the exhibit reference the symbolism of national borders and the conflicts they present, such as the ongoing migrant crisis.

MOCAK’s galleries are perfect for both political news junkies and arts newbies alike. Motherland in Art comes to a close soon, officially ending on September 30th (with free admission on Tuesdays).