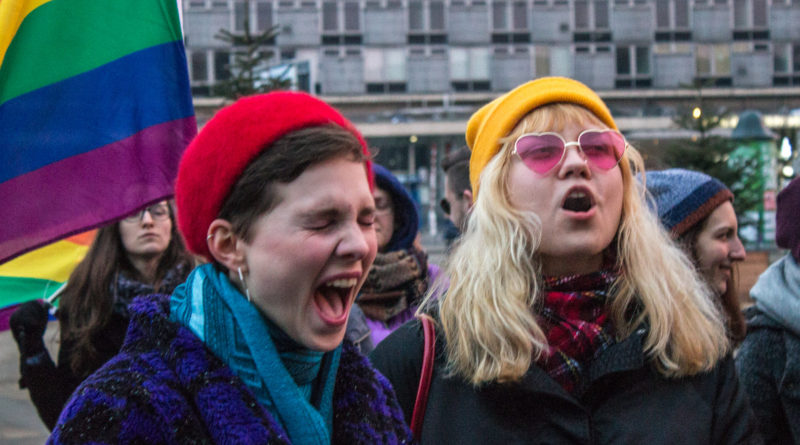 As one of the first warm days of 2018 settled into twilight this Thursday, hundreds of women and their allies gathered on the steps of Krakow’s National Gallery for the annual Women’s March in defense of their rights and dignity.

This was the 109th year since American socialists first proposed the holiday that would become known as International Women’s Day – though, for many women in Poland, it has become divorced from its feminist roots to become merely another day on which flowers should be given.

The women at the demonstration, though, were keenly aware of the holiday’s roots, with Poland’s burgeoning young democratic socialist party Razem strongly represented among the organizers and with participants carrying signs demanding equality and respect.

This comes at a time when many women have felt under increasing fire from the government – currently controlled by the right-wing Law and Justice (PiS), which has attempted to tighten Poland’s anti-abortion laws (already some of the strictest in the world) into a total ban. Over the past two years, these attempts have been met with a series of demonstrations and strikes known as the #CzarnyProtests (Black Protests).

Indeed, throughout the evening, the demonstration was stalked by a significantly smaller group of abortion opponents following behind. Separated by a line of police officers, they held up large images of aborted fetuses and used portable speakers to blast ominous music along with a looping prerecorded message warning against abortion.

It was also a significant year because it marks the 100th anniversary of women’s suffrage in Poland when the country regained independence following partition. In recognition of this, a number of the organizers were dressed in early 20th century fashion.

As women on the steps spoke about their issues from this year’s manifesto, including pay equality, improved medical care, better accessibility for disabled women, and less professional pressure on mothers, volunteers in the crowd passed out booklets containing the full manifesto. Then the crowd marched down the street, blocking traffic as they filed past a few geographical landmarks of Polish feminist history.

The swelling crowd concluded at the Main Square beneath the Town Hall Tower, where more speeches were given and songs were performed by the Krakow Revolutionary Choir. Finally, a dance was performed by a team representing One Billion Rising, a movement to raise awareness of rape and sexual violence against women.