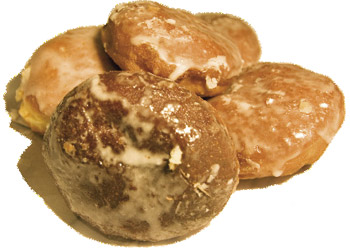 Thursday 11 February is Fat Thursday (Tłusty Czwartek) in Poland, a day of gorging on the last Thursday before the start of Lent, the 46-day period of supposed abstinence and contemplation that ends on Easter Sunday. It’s a day to use up stores of fat, eggs and sugar and also a day to pause your New Year diet, as in Poland, the hero of the day is the humble pączek, or doughnut. On that day alone, some 100 million pączki will be devoured in Poland, an average of 2.5 for every man, woman and child, so don’t be surprised if you see people hurrying out of the bakeries with trays of the goodies: they’re an accepted gift for family and co-workers and eating at least one pączek on that day is believed to bring you good luck for the rest of the year.

While the practice of frying sweet dough in oil has been around since Roman times, food historians say that frying yeast cakes developed in Mediaeval Northern Europe and their popularity has spread all over the world. Pączki became more popular in Poland in the 19th century, thanks to the French cooks at the royal court who passed on the knowledge of how to make light yeast dough. Deep-fried in lard or oil, refined alcohol (spirytus) is added to the dough in an effort to cut the calories by preventing the frying fat from penetrating too far. Even so, the average pączek still packs an average 250 calories into every mouth-watering, pillowy, sweet, rich and moreish package.

In order to give our readers a head start in the queuing on 11 February, we did a blind tasting just before this edition went to press. Corralling a glut of pączki from six different Krakow bakeries to the Krakow Post offices, I was joined by a panel of KP staff and Jonathan Ornstein (Director of the JCC and a man with wide ranging experience of U.S. doughnuts, Israeli sufganiyah and Polish pączki), and we diligently chomped our way through them so that you don’t have to. The pączki we tried fell into three distinct categories: great, good and OK (after all, no combination of fat, flour, eggs, sugar, yeast and jam can ever be bad).

Voted top of the list were the pączki from the Michałek bakery (ul. Krupnicza 6). They were slightly crispy on the outside and light and soft on the inside. In contrast to most of the others we tried, the fact that the jam wasn’t in a perfect blob in the centre testified that they were handmade from start to finish, rather than having the jam injected after frying. Our findings were no surprise as the Gazeta Wyborcza annual ranking has deemed Michałek’s the best pączki in Krakow for the last two years running.

Michałek was closely followed by the Cukiernia pod Arkadami (ul. Krakowska 5), whose pączki were much darker than any of the others, but were light, slightly chewy and had a light orange flavour and fragrance. They too were obviously made by hand from scratch.

The next two offerings were average and came from Kudelski (ul. Długa 29) and Piekarnia Buczek (branches across Krakow). Both were denser than those at the top of the class, and the Buczek offering was the largest of all those that we tried. Had they been lighter, they would have been great.

Bottom of the list came the pączki from Wanilia (ul. Brzozowa 13) and Cichowscy (ul. Starowiślna 21). Both of these were a surprise; Wanilia because their other products are usually great, and Cichowscy because it’s one of old Krakow’s favourite bakeries. Unfortunately, they’ve missed the mark with their pączki; Wanilia’s were more like a yeast bread and Cichowscy, by using real rose petal jam (uniquely among all of them), meant that most of us found the filling overwhelming. That said, born and bred Cracovians may love them.

So there you have it: our guide to the best pączki in Krakow, and something handy to have this Fat Thursday when you want to impress your co-workers or students.