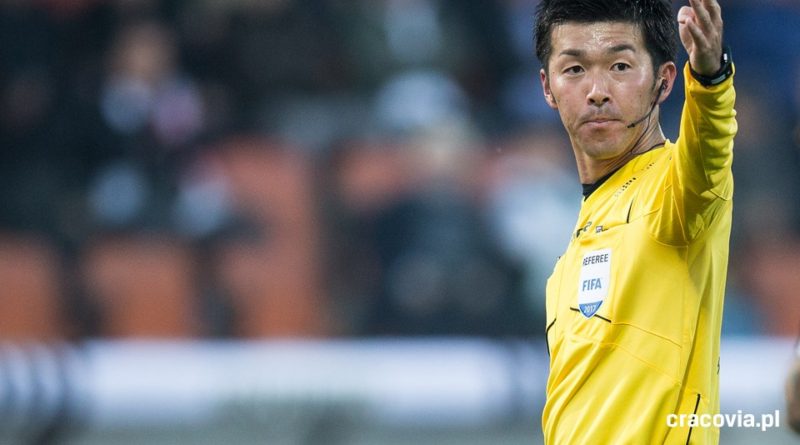 Homeless, First Timers, and Japanese: Why was this game a bit special?

Cracovia was traveling to Sandecja Nowy Sacz, a team full of surprises despite only promoting this season from I Liga (Div 2). The game had a particular flavor for several reasons.

First of all, Sandecja stadium is too small, so the team has been playing the home fixtures in the Nieciecza Stadium (another Ekstraklasa team) while theirs is being renovated.

Lastly, Japanese referee Yusuke Araki was in charge of the game. As part of an exchange between Japan and Polish Football Associations, Japanese referees get to blow the whistle in games in Poland in order to gain international experience. And the invitation goes both ways.

From Heaven back to Earth

Optimism and confidence were on the Pasy side thanks to their previous win, which took them out of the relegation zone. Without Captain Covilo and goalkeeper Sandomierski, Cracovia got the best game start they could wish for with an early goal from defender Michal Helik, who scored his 3rd of the season. His strong header put Cracovia in great condition.

After the goal however, the Pasy disappeared and spent the rest of the half defending and resisting Sandecja’s repeated attacks. Cracovia could rely on their impressively mature goalkeeper Adam Wilk (19 years old), who saved them a couple of times.

The second half offered a much slower game. Except for a few shots off target, the fans had nothing to get excited about until the 75th, when Baran got sent off. The Pasy could finally breathe and manage their lead with less pressure. They were even close to scoring more with Helik again, Malarczyk, and Drewniak, but the home goalkeeper Gliwa produced a few class-saves.

The Pasy were so close to their second win in a row, but Sandecja equalized in the very last minutes. Well-served from the wing, Piszczek managed to be faster than three Cracovia defenders to score. Proof that 10 Sandecja players could not be underestimated.

Overall, Sandecja deserves at least a draw. Cracovia gave away 2 precious points, but can be happy with a point earned away from home. Their defensive fragility and efficiency issues were reflected this time again. Their goal and best moments came from defensive players, which tells a lot.

The Mighty Legia Warsaw was visiting Wisła on Sunday for the Polish Classic. A special game, knowing the strong rivalry between both teams, not to mention both cities. The Henryk Reyman Stadium was full for the occasion, and with no Legia fans allowed, the entire stadium was behind the ‘White Star’.

Excitement, stress, passion: a mix of emotions was surrounding the game. Hope was one them since last time they had beaten Legia was in 2013, and given Wisła’s current form, this year could be the year. In a boiling atmosphere, Wisła fans got the show started in the stands with a beautiful ‘tifo’ banner (above).

A colorful first half

Compared to last year’s closed 0-0 draw, Wisła players showed an offensive mindset, high pressure, and a lot of goodwill. Coach Kiko’s men were not afraid to take initiatives, and Boguski was even close to opening the score in the first 10 minutes. However, their offensive play style was not risk-less and opened spaces for counter-attacks. This is how Legia created the most goal chances in the first half and opened the score at the 22nd via Niezgoda, following a smooth and quick counter-attack.

The best example to illustrate the rivalry was Legia middfielder Krzysztof Mączyński, heavily booed off by the whole stadium every time he touched the ball. The home fans could simply not forgive him for joining their rivals after spending the last two seasons at Wisła.

VAR, wasted chances and frustration
After the break, Wisła obtained a penalty for a fault in the box. The referee decided to consult the Video Assistant Referees (VAR) before canceling his own decision. The action was a bit tricky and not an easy call to make. However, the referee took responsibility for the decision.

Wisła kept on pushing and missed more clear goal chances, via Carlitos among others. The Spaniard was extremely active throughout game, but his efforts were not rewarded. It seems like this was not his night to score. 0-1 was the final score: the ‘Polish Classic’ offered an entertaining game, in a boiling and exciting atmosphere. The VAR episode will surely not be forgotten any time soon. Wisła can be proud of their performance, and the season is far from being over since they are only 2 points away from Legia and 3 from the League #1 spot.

Putting the VAR episode on the side, Wisła played a courageous game and threw a lot of efforts in the game. They could have scored a few goals but lacked precision at the crucial time. Legia’s strong and realistic performance got the job done. Without shining, they created chances, played as a solid block, and defended well. Despite a bit of luck at moments, their experience made the difference.

In the post-game press conference, a disappointed Coach Ramirez shared his thoughts:

It was a very intense game. We were punished with one goal, and luck was not on our side this time, not only to win, but at least to get a draw. I feel that my players gave their best, and the reserve players I brought in tried to bring something as well. We tried everything. I am happy with what the players showed. They cannot be blamed. And I am not convinced by the VAR system. It really takes off the spontaneity of football. Today was a good example with the penalty phase.